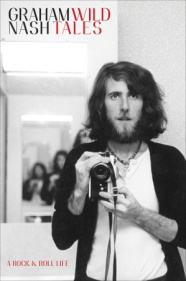 This is singer-songwriter Nash’s own story of his journey from junior school in Manchester to his life as a member of the supergroup Crosby, Stills, Nash & Young.

He takes us from Manchester to California by way of London and from the 1960s to the present day, via such memorable songs as ‘Carrie Anne’ and ‘Marrakesh Express’.

Starting life in poverty, he and his schoolfriend Allan Clarke formed the highly successful group, The Hollies, counting amongst their friends the Beatles, the Rolling Stones and the Kinks.

Nash later moved to America, where he became the lover of Joni Mitchell, before achieving even greater fame and creativity with David Crosby, Stephen Stills and Neil Young.

Verdict: In many ways a typical rock memoir – sex, drugs and a side order of music. An interesting book for anyone who grew up listening to the Hollies or Crosby, Stills, Nash & Young, although it may take time to get to grips with Nash’s way of writing/speaking; his language seems to have got stuck somewhere in the early 70s when presumably he first “got his sh*t together”. What also hasn’t changed is his absolute belief in his own talent. A good book, but not as good as he probably thinks it is! ***