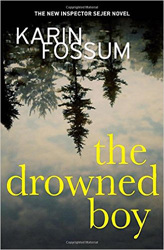 The latest in the series of Chief Inspector Sejer crime novels by Norwegian writer, Karin Fossum, this is rather different from the usual run of the mill crime story, as it’s not clear whether a crime has been committed at all.

After 16 month old Tommy is found drowned in a pond adjacent to his home, his parents are questioned about his death. Tommy’s father, Nicolai, appears distraught but his wife’s reactions – tears, anger, nonchalance – puzzle first the police and then Nicolai himself.

As more details of the family’s life are revealed, the story takes a darker turn. True, the ending is a bit contrived but I really didn’t care because the rest was so riveting and believable. I can’t remember when I last felt so strongly about the need for the right outcome.

A tragic and thoroughly involving story.