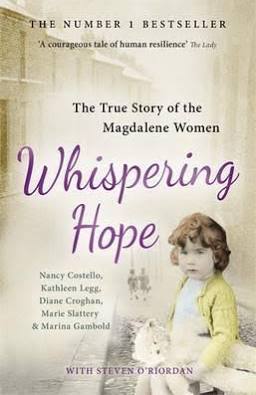 The terrible, true story of just five of hundreds, maybe thousands, of girls and women who were incarcerated in Ireland’s now notorious, state funded centres of modern day slavery: the Magdalene laundries*, run by the Catholic Church.

For decades people did not, could not or would not believe such institutions existed .

What is remarkable is how resilient the women in this book are, but how sad that, despite being innocent of any offence they felt such terrible shame that they didn’t even share their stories with their husbands or children.

Their “crimes”? In some cases girls were admitted by their families; there were teenage pregnancies, incest victims, girls who were just too pretty, those with learning difficulties or physical disabilities. Others were orphans or the children of unmarried mothers or of parents who were too poor to care for their offspring.

Their punishment? Years of forced labour.

Many years ago I met a woman who, as a pregnant teenager (a so called “mental defective” (sic)), had been admitted to a similar institution by her parents. Thereafter, the only way she could leave was to be “signed out” by her family; after they died she faced a lifetime of imprisonment, until an eventual change of the law led to her release. I was haunted by her story, as I am by this book.

There is no need for sensationalism and there isn’t any. The truth is too shocking to need any enhancement.

*The last of the Magdalene laundries closed only 20 years ago and in 2013, Taoiseach Enda Kenny issued an emotional and heartfelt apology for the role of the State.