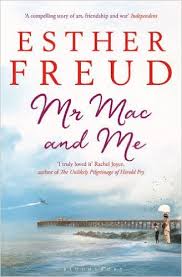 Mr Mac and Me by Esther Freud – Published by Bloomsbury, 2014

This book was recommended by a friend whose taste in books frequently matches mine; I started reading it some time ago but couldn’t make any headway, despite being a fan of Charles Rennie Mackintosh (the Mr Mac of the title)

Having few interesting alternatives to read during a recent very rainy weekend, I decided to have another go.

Set on the Suffolk coast in the period immediately prior to and during WW1, the story tells of Thomas and his family, drawing on elements of Mackintosh’s time in East Anglia, a period when he was suspected of being a spy.

A slow burn of a read, but after the first few chapters I was thoroughly hooked. A moving, believable, often claustrophobic story of village life through the seasons, in times of peace and war.

Beautifully written. 296 pages; I wish there were more.