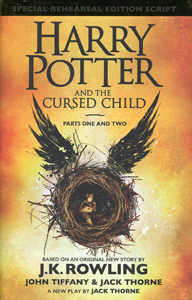 Harry Potter and the Cursed Child (Special Rehearsal Edition Script) Parts One and Two – Based on an original new story by J K Rowling, John Tiffany and Jack Thorne – Published by Little, Brown, 2016

This is the eighth Harry Potter story and is set some 19 years after the last one ended.

First, a warning: it isn’t a story in the tradition sense; it’s a script and some might find that distracting. Some of the scenes are quite short so, unless you pay attention, it’s easy to lose track of the plot and who’s who.

Reviews of the book have been mixed and I must admit that, despite being an ardent Harry Potter fan, I put off reading it for several days after publication as I didn’t want to be disappointed.

The two couples (Ron and Hermione, Harry and Ginny) and Draco Malfoy are moved to the background, with Albus Potter and Scorpius Malfoy centre stage as they try to live with the legacy of their respective family histories and change the past.

I enjoyed it to a degree, but much of the dialogue (and the plot) seemed contrived and/or predictable and there was altogether too much hugging and talking about feelings. Do young boys really talk about their feelings that much (or at all)?

I suspect that, when seen on stage, with all the special effects they can muster, it will seem much more exciting. And, as the rehearsal/preview version of the script, it’s possible the final stage show will be quite different (and better).