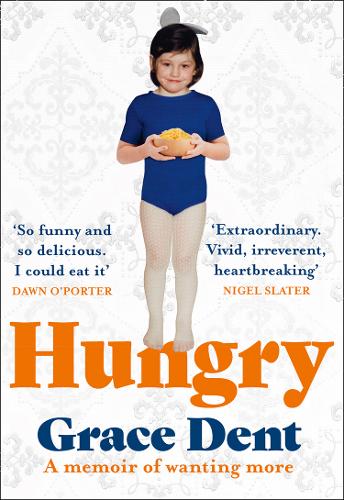 Grace Dent is probably best known for her regular appearances on Masterchef, or maybe as the Guardian’s restaurant critic, or for her books aimed at young adults, or her radio shows, or….well, you get the picture.

Hungry is a story of three parts: the story of her happy childhood, the journey to becoming a highly regarded food critic and finally the pain of dealing with the fact that the life she once knew and those she loves are slipping away.

I really liked this book. From descriptions of the Sketty made by her father to the excitement of building a vestibule, her joyous turn of phrase and “bon mots” fulfil what Grace refers to as “finding joy in the mundane”. That just about sums it up.

I smiled and occasionally laughed out loud (after all who hasn’t heard of someone “caught skipping out of a cul-de-sac … carrying a 12 foot stepladder and 15 L of crown marigold emulsion despite a debilitating spinal condition”).
By contrast, there are descriptions of her father’s dementia which were so vivid they filled the room and blocked out all other thoughts.
Reading other reviews it’s clear that not everyone was impressed by her naked ambition, which they interpreted as pushiness (or worse), but I’d hazard a guess that very few people make a success in the world of journalism or TV by being “backwards in coming forwards”.
From the safety of being sent to “play out” until it’s dark to the impact of Covid 19, this is a finely drawn mix of nostalgia and life in the present day written in a way that resonates with many of us