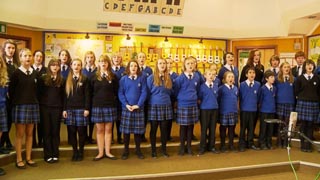 Students and staff at The Roseland Community College got together to produce a unique cover of fun’s “Some Nights” in aid of the BBC’s Children in Need.

The single has had an introduction and praise from BBC Radio 2’s Simon Mayo and many plays of the song on BBC Radio Cornwall, which features help from a certain yellow bear, Pudsey!

This year’s charity single includes many student soloists, the school rock band, the Roseland Voices choir, staff choir, jazz band, staff and student steel bands, samba band and many of the students and staff at the college all getting involved in a variety of ways.

Mastermind behind the idea, Pete Appleyard, told Roseland Online, “I’m so happy with how well it’s come together. We started off in September with not much of an idea as to what we wanted to do this year, but quickly found a song we wanted to cover and started recording the music. The staff and students at the college have all been fantastic and I’d like to say a massive thank you to all of them for their help and support with the project.”

16 students, along with a few members of staff, attended the Pudsey Party at Exeter on Friday 16th November and presented a large cheque for over £1000 live on-air. The Roseland was also featured many times on both the Spotlight and Children in Need broadcasts locally and nationally.

The single is available to watch below, and on youTube and if you’ve enjoyed watching the single maybe you’d consider donating to BBC Children in Need, through Roseland College’s JustGiving: http://www.justgiving.com/roseland.