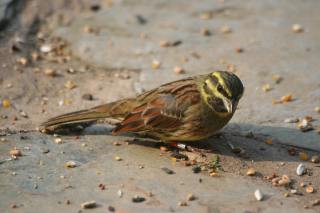 At the end of March, after a relatively benign winter, it was evident that the population of cirl buntings on the peninsula was in good shape and well set to build upon the excellent progress made during the previous two fine summers. Inevitably, as time goes by, the number of colour-ringed birds – those that were sourced as nestlings from Devon and hand-reared, before being released at the release sites on the peninsula – reduces and by April we were down to seven. Amongst this group were two birds born in 2010 – exceptional for any cirl bunting to survive this long!

By the end of April, 39 pairs – the overall total for 2014 – had been located, with plenty of time for many others still to be found. Though, as usual, there were very few successful nesting attempts recorded in May, we did record our earliest success to date with a brood fledging during the first week. Both June and July brought favourable conditions and though one of our two oldest ringed birds did not make it to its fifth birthday, the other one did, making him the oldest bird recorded on the project so far! Proving that age is no obstacle to productivity, he again successfully fledged two broods, as he had done in the previous year, bringing his overall total to an impressive eight fledged broods (15+ fledglings) from his five breeding seasons. 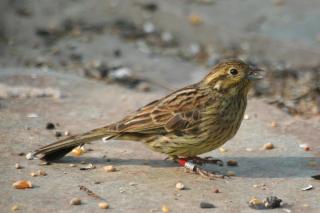 During July we reached a key milestone by recording pair number 50. During the following weeks two more pairs were added, meaning that the population had again increased substantially by more than 30{c8c3b3d140ed11cb7662417ff7b2dc686ffa9c2daf0848ac14f76e68f36d0c20}. With so many breeding pairs it was difficult to keep an accurate count of the number of fledglings being produced, though it was still possible to record the number of successful broods. Despite trying conditions in August (for both holiday-makers in Cornwall and breeding cirls!) that led to several failed nesting attempts, overall productivity was good with at least 49 fledged broods (at least 100 fledglings) produced from the 52 pairs. Of these, 12 pairs produced two fledged broods, whilst one pair, impressively, managed three.

Since 2011 the reintroduced population has been entirely self-supporting and has shown itself to be resilient, as demonstrated by its ability to recover from setbacks like the dreadful summer weather of 2012. The population has continued to grow to a level that is now considered self-sustaining and has fulfilled the project’s criteria for success. In doing so it has resulted in the first successful reintroduction of a passerine (perching bird) in Europe! 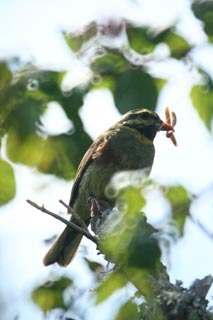 The success of this project is due to the collaboration of all the project partners – each bringing with them their own skills and resources. However, the project would have had no chance of success without the co-operation and enthusiasm of the local farming community, who have very kindly allowed access to their land to monitor the cirls and adopted the Environmental Stewardship schemes that have provided the traditional, mixed farmland habitat which is so crucial to the cirls survival. We are most grateful to them, as we are to our team of volunteers and staff who continue to monitor the population of Roseland cirl buntings.

It is so satisfying to once again see and hear this bird in such good numbers across the peninsula. Just like the recent return of the chough, a piece of Cornwall’s once-lost biodiversity has been restored. Let’s hope that this time they are here for good.

If anyone has any sightings, or simply wants more information, please feel free to contact me, or if you live on the Roseland and would like to see the cirl buntings, then please just let me know as I’d be delighted to show you them – stuart.croft@rspb.org.uk

The Cirl Bunting Reintroduction Project is a partnership project to re-establish the cirl bunting in Cornwall, between the RSPB, Paignton Zoo, the National Trust and Natural England.