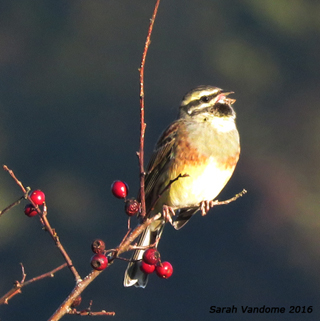 Summer 2018 has been remarkable for its hot summer weather. I am hoping it will prove notable for the breeding success of our farmland birds, especially our cirl buntings.

Despite the snows in winter and early spring, it has become evident that the cirl population was relatively unaffected. Once the warm weather was fully upon us, breeding began in earnest. There is anecdotal evidence that pairs were able to extend their breeding season well into September – an unusual occurrence – as the prolonged dry season continued to favour late broods.

By the end of August 2018, we had managed to record 62 territories, with just two of us doing the work intermittently. This compares favourably with the 65 territories recorded in 2016, when we had more volunteers helping. We could well have recorded more territories, had there been more help and time available. So, all in all, we feel the Cornish cirl population is doing very well. It remains entirely self-supporting and resilient, as demonstrated by its ability to recover from the challenges the weather raises.

The population is now comprised only of wild bred individuals. The last ringed bird, a six and a half-year-old male at St Just, disappeared in February. He was one of the oldest cirls ever recorded, and all the more remarkable a bird for having been hand-reared prior to fledging and release. We remember him fondly. He had a great singing voice. Hopefully his territory has been taken over by one of his offspring. 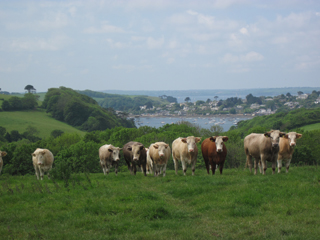 The success of this project is still very much due to the co-operation and enthusiasm of the local farming community, particularly where their adoption of Countryside Stewardship schemes has provided the optimal mixed farmland habitat which is so crucial to the cirls survival. We aim to continue working closely with as many of them as we can through the recently formed Roseland and Fal Farmer Facilitation Group. The scheme is funded by Natural England and run jointly by the RSPB and Westcountry Rivers Trust, with the additional support of Tregothnan estate and Cornwall Council.

The autumn/winter monitoring period is now underway. With my colleague and occasional other volunteer helpers, we will be walking the Roseland farmland looking for as many individual cirls as we can in all the core areas where cirls are known to exist. We hope to occasionally look in some of the outlying regions too, but we can only do this if we have time and, preferably more volunteers. So, if you would like to join us on any of the bi-monthly survey days, then do let me know. And if anyone has any sightings of cirls, or simply wants more information, please feel free to email me sarah.vandome@rspb.org.uk.

The Cirl Bunting Reintroduction Project is a partnership project to re-establish the cirl bunting in Cornwall, between the RSPB, Paignton Zoo, the National Trust and Natural England.