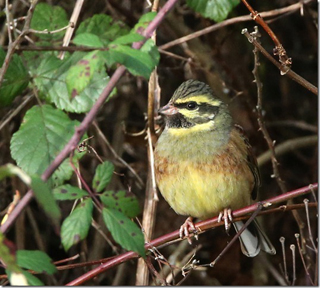 Rarely was the weather out of the news during 2012. At the end of the year it could only be hoped that we wouldn’t see a repeat for many years (or should that be decades?) of the seemingly, never-ending rain that marked the British summer of 2012. The affect of such adverse conditions on the cirls and various other wildlife, has been particularly detrimental. Just as well then, that the population of cirls across the peninsula had built up to a level that could help them withstand such a poor summer. So, as a new year began, we were all hoping that we would at last see a return to a sequence of seasons more akin to what our memories had made us more accustomed to.

However, the opening months of 2013 offered little respite in the weather that had either been wet, cold or both for more than any one cared to remember. Across the peninsula small groups of cirls were to be found at about ten sites as temperatures remained stubbornly in single figures. By April a minimum of 76 were recorded, representing a 17{c8c3b3d140ed11cb7662417ff7b2dc686ffa9c2daf0848ac14f76e68f36d0c20} decline compared to the previous year’s total. Given the relatively low rate of productivity during 2012, this was not unexpected. However, more surprisingly, it became clear as spring advanced, that it was the population of adult females that had reduced, with the same number of males being found compared to the previous year. Out of a total of nearly 50 males, up to 20 sang throughout the season in territories that were absent of a female mate. 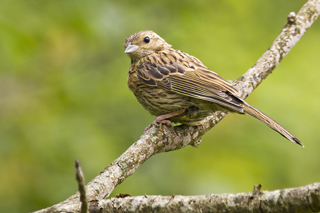 Was it possible that we were not finding the missing females due to them being less conspicuous than males? Given that so many non-breeding males were identified, it would be an unnatural scenario for there to be a further, significant population of non-breeding females. Such birds would be ‘snapped up’ quickly by the males (both paired and unpaired). In previous years, even recently-widowed females had re-paired and bred within weeks of losing their former mates, suggesting that unpaired females do not generally remain unpaired (even in populations that comprise fewer males than females, as polygyny appears to be not unusual in cirl buntings). Maybe then, these missing females had moved to new areas. However, like many species, once a pair of cirls claim a territory, they tend to keep it for the duration of their lives. The unpaired males were monitored throughout the season and apart from a few, the vast majority, sadly, went unrewarded in their quest to find a mate.

By the end of May, 24 territory-holding pairs had been located (plus the unusually high number of approximately 20 unpaired males). The distribution of these territories was similar to the previous year, apart from at the north-eastern part of their range, where pairs present in 2012 were missing in 2013, due to the absence of the females that had bred there in the previous year. The unseasonally cold spring, that persisted in to May, hampered all the early nesting attempts, with the first appearance of fledglings coming towards the end of May. With a marked improvement in the weather from June, the cirls began to enjoy far greater success as the range of insects, so vital to growing chicks, were far more readily available to foraging parents. A heat-wave declared in July, followed by a settled period for the following weeks marked a return to a summer that we all dream of, complete with the sounds of buzzing bees and stridulating grasshoppers and one which was so badly needed by a whole host of species, in order to, at least, partly address significant declines in their populations due to the recent poor weather. As the summer progressed a few more breeding pairs were found to take the total to 28 – the same number as there was in 2011. 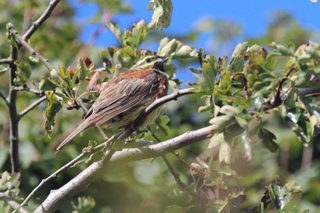 Several more fledged broods followed in August and even in to September, with the final brood fledging on the late date of 13th September – the latest date recorded during the project. The 28 pairs produced 28 successful, fledged broods that totalled a minimum of 66 juveniles – productivity slightly higher than the average for the previous six years of the project. Most pairs produced a single fledged brood though seven were successful in producing two. There was one incidence of polygyny – one male breeding with two females – and followed the disappearance of a male paired to one of the females. The neighbouring male was soon on hand to fill the gap, before returning to complete his parental duties with his original mate; the upshot being two successfully fledged broods.

We shall have to wait and see what the winter brings, but hopefully, it won’t be too harsh and mortality amongst the cirls will be low. Another summer as good as this year may be too much to expect next year, but given a reasonable one at least, it would allow the cirls to recover and see a rise in the population once again.

The cirls will continue to be monitored by our team of staff and volunteers for whom we are, as always, most grateful, just as we are to the Roseland farming community who continue to support our work through Environmental Stewardship.