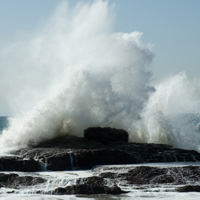 Well, we have opened and are there to protect all of you  water users happily gambolling in the sun! At least that was the idea. It was somewhat spoiled by the sight of our members going down to the Lookout swathed in as much clothing as they could get on. Once inside and opened up they watched in fascination as the dials on the weather machine span backwards (temperature) and upwards (wind strength). Their early transmissions to MRCC were characterised by the sound of chattering teeth.

Seriously though, as you may have noticed, it has not been a brilliant start to the season. We have opened the Lookout as scheduled and it has been manned (or womaned) as promised, the flag has flown bravely, but potential customers have been thin on the ground,. The beach has,  except for a few nice days, been virtually deserted, though the Coast Path has been busy with walkers over the Easter holiday. Many of these have stopped to talk – a chance to get out of the wind – and have, as usual, been surprised and interested in what we do. In fact our busiest occupation has been warning people of the danger of standing too close to the edge of the cliffs in the strong winds.

We have hit Force 8 gusting 9 and that is strong enough to catch the unwary and make them take a step back. If you are on the edge that’s a step too far.  Think about it.  How many times, if you have an exposed garden or roadside, has a gust caught you and made you take a pace back. It means nothing at your home but at the cliff edge it can mean a long drop to the bottom. Our cliffs are not high and often it would simply mean a fall of a few feet to the next edge. But as one of our members can tell you, an unscheduled step on even these low cliffs can mean a broken ankle. Think what that would do to your holiday prospects or your work schedule. It is not for nothing that we preach ‘Take care on the cliffs – especially in high winds’.

Most of last month has been steady easterlies, varying from  north to south  east, but always from that quarter. The result has been a steady build up of the swell which continues even when the wind drops. The   wind rises and the swell is amplified by the wind effect and you start to get quite large breakers crashing on the rocks below the Lookout, shooting  spray high in the air and covering the windows with salt. 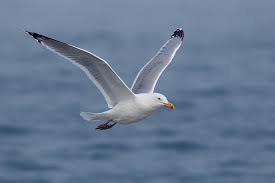 Inside, of course, you are sheltered and it has been fun waiting to see how high the next one would be and watching the  seagulls riding the  winds, steadily being forced back  landwards. All the other birds have given up and have started walking, crows, jackdaws, the odd raven and an assortment of small ones which I cannot name – I am not a great birdwatcher. I wonder what effect the weather will have on our usual summer visitors at sea, seals, dolphins and basking sharks.

You need a fairly flat sea to identify basking sharks, just the fin cruising through the water, a benign Jaws. They only eat plankton of course and, if you are lucky enough to be in a boat when they chose to visit you, you can see the massive mouth open, passing tons of water through its gills as it cruises along, sieving out its food. Yachtsmen, if they are sensible, don’t chase them. If they are about the chances are that they will come to you, choosing their own time to approach and if you keep a steady, slow course, they seem to be completely unfazed by the hull of the fortunate yacht or the sound of its motor. 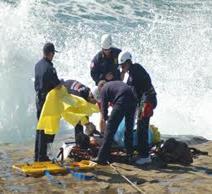 Just think: one careless moment and this could be you!

Different the dolphin though. They revel in the sport of playing last across with any yacht or motor boat. It seems as if a large group will hear the sound of your passage through the water and rush across to join in the fun, half out of the water in a cloud of spray, a foot away from you side, disappearing underneath only to leap up and grin at you from the other side. They are the humorists and clowns of the water world and sometimes we get them in the bay between Portscatha and the Lookout, where they might stay for a week – then, one day, they are gone.

The lookout is a great place to see birds and sea life. It is a natural hide, been there for years, and is part of the landscape. You have binoculars and telescopes and which one of us has not yielded to the temptation to sight in on an interesting bird or mark in the water to try and identify it. Keeping a good lookout is important and is the reason we are there – but let us recognise the fact that a good lookout requires a fresh mind and that means the occasional relaxation.