They Come In All Shapes And Sizes 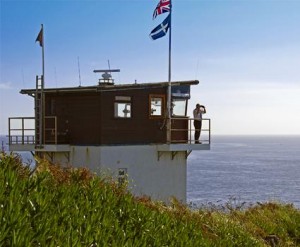 It doesn’t seem like it but Spring is with us and Summer just around the corner. It may stay there, completely out of sight. For us, though, it means the start of the ‘Watching Season’ when the Lookout is manned on a regular basis. During the winter maintenance has been done on equipment, doors and locks etc, so we are ready to go. The big problem this year has been the lock. Exposed as we are on top of the cliff padlocks are an eternal pain in the neck. No matter what we do with lubrication it always seems that, by the time winter comes, the thing is sticking so that both the key and a hammer are needed. Security is very necessary because of our isolation so this year we have invested in a new lock – which, of course, entailed door surgery to fit it. Pundits among us say this will be the cure. Water cannot get into it. Time will tell. 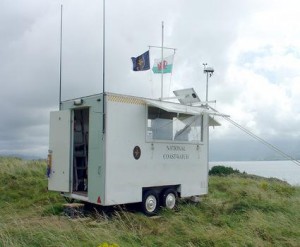 MORFA BYCHAM near Holyhead (I thought we had difficulties!)

I suppose every Lookout has these perennial maintenance problems which are a continual drain on the bank account. I sometimes think the finance system in the NCI as a whole is akin to the one practiced by Her Majesty’s Treasury. Money is gathered in but trying to get any back out is akin to a labour of Hercules. We are allowed to keep a small local bank account but it is small and money is always short. For this reason we are eternally grateful to those local organisation, pubs and shops which help with collections and donations. It would not be right to name them here (I might miss one out!) but they know who they are so please accept our grateful thanks. Without your help we would be struggling. Thanks in advance also to those of you who see us at a ‘tin rattle’ somewhere in town or visit us in the Lookout and pop in a small donation. 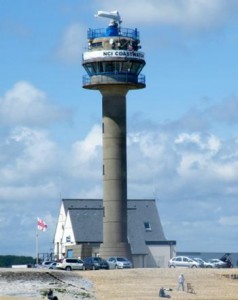 Calshot Spit, Southampon
What if the Lift Breaks Down?

United Kingdom is, I believe, unique in our system of Charities and it’s amazing how large organisations survive on the generosity of the public. Take NCI for example. From our small beginnings with one station opened at Bass Point on The Lizard in 1994 we have now grown to 49 stations, running south around the coast from Rossall Point, which is near Fleetwood, in the northwest to Sunderland in the north east. Cornwall has its fair share of stations, as one would expect from its length of coastline and the fact that the Organisation began here all those years ago when the people living around Coverack decided they had had enough of ‘Government cuts’

putting people’s lives at stake and they were going to do something about it. Hence Bass Point. It may be this long history of self help which brought about the award in 2011 to the Cornwall branches of the NCI of the Queen’s Award for Voluntary Service. It went to all Cornish Stations and a plaque commemorating this hangs in our Lookout and Members are entitled to wear the official badge. 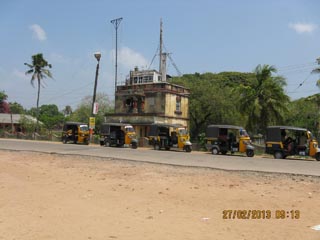 Our Branch in India!!
Old? Coastguard Station at Alleppy,
Keralla. May still be in use. Now seems to be a taxi rank!

Lookouts come in all shapes and sizes, some big, some small, some affluent, some living from hand to mouth, but all manned by people who are prepared to give some time to watching over the safety of water users.. Last year NCI stations were involved in some 280 incidents relating to water safety. These range through watching over disabled yachts, reporting floating hazards like tree trunks and containers, calling the life boat to assist an exhausted kayaker – an assortment of incidents, some hazardous, some false alarms and some bizarre – such as using a Tannoy to re-unite an owner with his wallet found on the beach! I hope he gave a donation!

So now we start a new season and are fortunate that we have ten people ‘in training’. It will not take long for them to become qualified to stand their own watches and therefore boost our numbers. More members means more hours can be covered and that means better safety all round. We really want to be able to cover the full week, but we are still short of the numbers to do that. Why not look in to the Lookout one day and see what goes on – Thursday to Monday, 9.30am to 5.00.pm. If the flag is up someone is there. Or use that phone number – 01872-501838.