What a Spectacle It Will Be 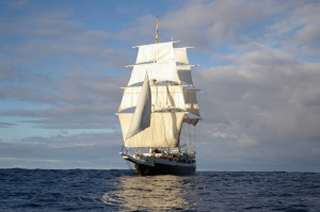 Between 28th and 31st August this year the world’s finest spectacle of sail will take place at Falmouth – the tall ships will gather for a Race.. We will probably be fortunate enough to see some pass the Lookout on their way to the rendezvous and, if the wind is favourable for us, whoever is on Lookout Duty on 31st will be able to see the fleet if they leave Falmouth on a port tack – that is with a wind coming from the south or south west. There is very little room for these monsters to leave on a starboard tack as that quickly brings them up against the Lizard and, in any case, their next port of call is London – a course that brings them right past our front door.

Though called the Tall Ships Race, and undoubtedly these are the stars of the show, there will be many smaller vessels in the regatta. Traditionaly only a three masted vessel, square rigged on all its masts can be called a ship. Every other square rigged vessel is a barque, barquetine or brig. However the criteria for entry is that the purpose of the vessel is sail training and 50{c8c3b3d140ed11cb7662417ff7b2dc686ffa9c2daf0848ac14f76e68f36d0c20} of the crew must be between the ages of 15 and 25, so that entrants will range from the giant sail training vessels of some of the world’s navies, all square rigged, down to the small cutters and sloops, 50ft to 75ft, carrying a crew of about eight young people. Previous races have attracted entries of over 100 sail training vessels and there is no reason to think that this year will be different. Most of these crews will be under 21, they will live in tough, cramped and possibly wet conditions, so, maybe, there is hope for today’s youth and not everyone is hanging around a street corner! 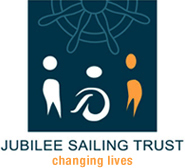 I am going to make no apologies for devoting a lot of this month’s entry to my other favourite charity – the Jubilee Sailing Trust. The Trust owns two square rigged ships, Lord Nelson and Tenacious. Nelson was launched in 1986 and is a steel vessel, while Tenacious, launched in 2000, is a wooden ship. She has two distinctions – she was built upside down and, during the building, those young people who were likely to sail in her were allowed to stay at the Yard and assist with her construction. What made this more remarkable is that many of those who came were physically challenged! Which brings us to the purpose of both vessels, which is to take people who suffer from physical disabilities sailing, not simply as passengers but to actually be crew and help handle the ship.

Each has been built with that as their prime purpose. All gangways are wide enough to take a wheelchair and access between decks is not simply by stairs – stair lifts are fitted. Fastening points are set along the decks so that wheelchairs can be secured in a heaving seaway and the handrails along the deckhouses are embossed with arrows to tell those who have sight handicaps which way is aft and which way is forward. Yes – the ships cater for those with severe sight problems as well. They are fitted with audio compasses so that a blind person can stand and steer the ship on a given course, an audible warning sounding if they stray. In fact no physical disability is barred providing the person has medical clearance to attend. Unfortunately they cannot cater for those with serious mental problems. 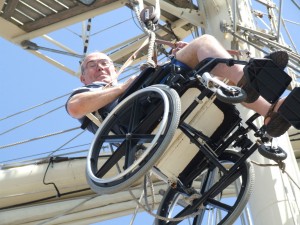 Each vessel has a captain and mate, both of whom will have Master’s Certificates in Sail (uncommon these days). Each will have a Second Mate and a Third Office/Bosun. There will be a Chief and Second Engineer. All these will be full time professional seamen with the necessary qualifications. Each will carry a Qualified Medical Nurse, a Cook (Professional) and a Cook’s Assistant plus two Bosun’s Mates. These last are volunteers who stay with the ship for a period of time for their food and keep. The idea is that, should it become necessary, there is a large enough professional crew to handle the ship. In addition there will often be a Doctor if one can be found for a voyage and he will get discounted rates in return for his comforting presence.

The ships run on a buddy system with both able bodied and handicapped crew members. There are about 40 in a voyage crew and those who have more serious disabilities will be paired with an able bodied person, possibly someone who has agreed to come with them. Failing their own friend an able bodied volunteer from among the voyage crew will be their buddy. The buddies purpose in life is to assist their charge in getting to the right place at the right time and correctly dressed in whatever safety gear is needed for the task in hand. Those in wheelchairs will have a private ‘cabin’ with their buddy, those who are mobile will sleep in tiered bunks in male and female dormitories. 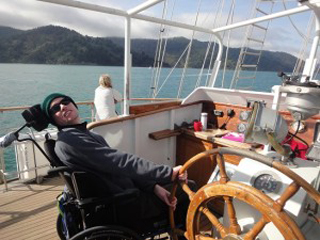 The voyage crew sign on as would the crew of any merchant ship. There are no concessions as to what is expected of the able bodied or not. If sails are to be hoisted then ropes need pulling and all are expected to be on deck to pull. Wheelchairs can be anchored so they can pull as well. Its wet, dark and cold and two in the morning– then tough! Things will look better at ‘Happy Hour’ at 11am when coffee and biscuits are handed round. Before that there is a ship to clean and even those who have limited arm movement will be found something they can do – with their buddy’s help. If it’s your turn to help out prepare the food I am sure you can be sat down at a table with a potato peeler! As I said – no concessions but gatherings in the bar in the evening for those off duty make up for it all.

There is a briefing held at the start of the voyage and the voyage crew will be told that no one is going to tell them they cannot do something. The only rule on deck is that if you want to go out along the bowsprit (wide enough to take a wheelchair) you have to get permission of the Officer of the Watch. Other than that it is up to the individual to decide what they can or cannot do on deck. While sails can be set and furled from the deck, a harbour stow, rolling them tightly and tying them down, can only be done by climbing the rigging and walking out along the yards. All crew members may help with this though this is one job which you choose for yourself. It entails climbing the rigging and then walking out along the yards, feet on the bar below the spar, four or five people on each side of the mast. The tough canvas then has to be punched and pummelled into place and tied down. You need a good head for heights, but many people with minor disabilities do go up. 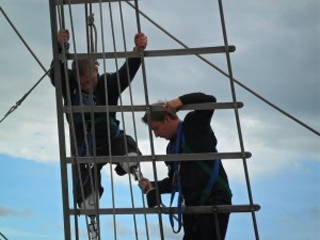 When at anchor anyone who wants can have a go at climbing. I have seen people who cannot walk except with the aid of sticks struggle up to the first platform, a regular crew member climbing behind them. The first platform at the lower crosstrees of the mainmast has a large hole where the mast passes through – wide enough for a wheelchair and its occupant to be hoisted so they can sit high in the rigging and admire the view. The ships carry large RHIBs and these are adapted to secure wheelchairs one behind the other – a bizarre sight to see four wheelchairs skimming at speed across the waters of a bay for a barbecue!

As you may have gathered I am a great supporter of this Charity. The professional crew, carefully selected, combine humour, compassion and help with a no nonsense approach that there is a job to be done and, even with your disability you should try and help. My experience is that those who are so unfortunate love it. They are treated as normal people, have to do the normal uncomfortable things, and no-one says they cannot do it. If they try and fail then their buddy or a crew member will tactfully help. For the time they are onboard they are treated as equals, be it a difficult, wet, uncomfortable situation at two in the morning or sitting singing in the bar in the evening. Lord Nelson will not be at the Regatta, she is on her way back from the Caribbean, but Tenacious will be there. Try to pick her out. No good checking on the crew, they will look the same as every other crew in the Race – after all, they are treated in the same way.

This is one of the perks our volunteers enjoy – being able to see vessels of all types and sizes as they pass to and fro in front of our Lookout. Admittedly many are a long way out but our high powered telescope brings them close enough to make out detail. We see all sorts of events go by, and, in some cases, have a role to play. For example we act as a safety observation point for the annual swimming race across the bay from Portscatha to the Beach. In other cases we are told something will happen and we keep a look out to see all is well. Such a recent one was the solo kayaker who passed by on his way to Scotland. Sometimes they end in tragedy as with the clergyman who tried to row an eight foot dinghy from the Solent to Pendower Beach and back in early spring. Sadly he made it to Pendower and was lost on his way back – not in our area.

This is all grist to our mill. We need more volunteers so we can open every day of the week. At the moment we cannot manage Tuesdays. Why not give Bob a ring on 01872-580720 or alternatively Robert on 501670. There will be no obligation