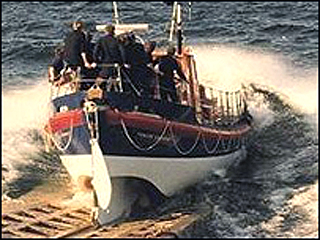 As I sit and write this we are coming up to Remberance Sunday. Next month, when this will appear, is December and we should think again of another group of men who gave their lives trying to save others.

19th December, 1981, was a stormy day as the ship Union Star approached the Cornish coast. She was a new ship but even so, as she ran across Mounts Bay and eight or nine miles east of Wolfe Rock, she suffered engine failure. The south easterly gale was gusting up to Force 12, (100 mph) and rapidly drove the engineless ship towards the rocks near Lamorna Cove. A helicopter was scrambled and then the call went out asking for the Penlee Lifeboat to launch.

She was a 45ft wooden lifeboat of the Watson class, seaworthy and tough, veteran of many successful rescue attempts. It took them an hour to get to the Union Star by which time the ship had struck at Boscawen Cove and was pinned against the shore. Without going into all the detail, there is plenty available on Internet, the Lifeboat managed to take off four survivors in one sweep and apparently returned for the rest. That was the last heard of her. She, all of her crew and all aboard the Union Star, were drowned. Eight lifeboat men, all volunteers, lost at sea, the biggest disaster to hit the RNLI since the loss of the Longhope boat in Scotland in 1969, though five out of a crew of six were lost from the Fraserburgh boat in 1970. 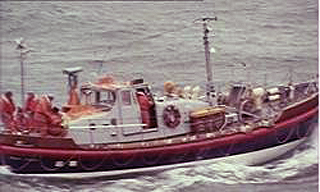 Like most emergency services such risks as these are accepted daily by the men and women who form the crews. A difference with the RNLI is that over ninety per cent of these are volunteers. Something to ponder on every time we set in motion the launch of either our boats, the Inshore RIB or the big All Weather Boat. Our call from the Lookout that someone is in trouble is usually accepted with but little discussion with MRCC at Falmouth. They, like us, have a doctrine ‘better safe than sorry’ and know that the Lifeboat crews would rather come out when the job is still easy than wait till it all goes pear shaped. There are never any recriminations if it turns out that they were not needed anyway. How fortunate we are in this country that the cover of our emergency services is free. 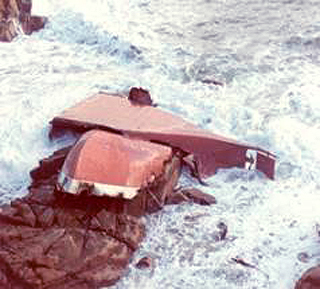 The areas we cover, Veryan and Gerrans Bays, are relatively benign. We have no tide rips, no high cliffs, save distant Nare Head, no caves submerged at high tide in which people can get trapped. Indeed, it is difficult, though not impossible, to get cut off by the tide here as nearly everywhere you can walk to safety as the waters rise. We do have one serious underwater reef, the Whelps, which run out from Gull Rock, but even these are visible in daylight with reasonable visibility. True, they have claimed their victims at night – the Hera for one, but most casualties in this area occurred in the 18th and 19th centuries when sailing ships were most vulnerable to being driven ashore by gales. It would have been easy for a square rigged ship, with poor windward performance, to get embayed between Dodman and the Lizard – especially with the safe haven of Falmouth beckoning.

A quick check of the RNLI records shows that one or other of the Falmouth Lifeboats attended incidents in our area nine times during the summer season of 2012. Not every one of these calls would have been instigated by the Portscatho Watchkeeper but it serves to show that the area we cover can have its problems. Fortunately none of these incidents involved injury, but was that because the Lifeboat was able to attend in time? In those cases where our Watchkeeper did instigate the call what could have happened if the problem had not been spotted by someone in the Lookout? 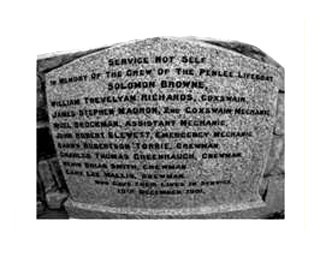 A session in the Lookout takes no more than three hours of your time on perhaps one day a weekend that is Thursday to Monday. You can do more if you wish and there is no obligation even to do the one Watch. It is recognised that all Watch keepers have social lives, we all have sickness of ourselves or family, we all have occasions when we ‘just have to be somewhere’. If you cannot do anything one weekend then no one worries. We are a very ‘laid back’ group yet at the same time manage to achieve a professional approach when actually ‘on duty’, helped in this by a Training Programme designed to make the learning process painless. Our Station has achieved ‘Declared Facility Status’ to Falmouth Coastguard’s Maritime Rescue Centre and we are tested annually by an inspector from NCI Headquarters to ensure we are up to scratch in the necessary skills we need to do the job. In addition to that all of our Watchkeeper’s will either hold or be training for the necessary radio operator’s certificate. This is not a difficult hurdle but you then have the satisfaction of knowing you have conquered another aspect of your training. If you think you could do it give Pat Rigley a ring – 01872 501838.