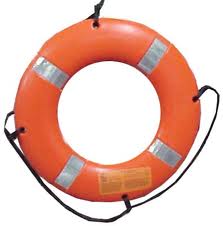 There was a long discussion at a Meeting earlier in the year when someone raised the point that we did not keep any life ring or throwing line in the Lookout. You must bear in mind that the Lookout is perched on top of a low cliff at Pednavaden Point between Porthcurnick and Porth Beaches At this point the cliff is not sheer and can be easily scrambled down  to the rocks below which jut out all around the Lookout. These become a favourite spot for anglers and people who simply want to get closer to nature, that is right down on the rocks. They always cause us mild concern as the rocks can be slippery and those at water level are washed by the waves. You see a man carry his gear down on to the rocks and set up his tackle in full view. A note in the log as he is a ‘vulnerable person’ and then you get on with doing other things, sometimes important ones like pouring a cup of tea. Time goes by and after ten minutes you look for him again – and he isn’t there! It is not practical to watch one particular spot continually if you are going to cover all of our ground and, in any case, you are often distracted by a radio message or perhaps the weather forecast. So suddenly the case of the disappearing angler raises its head. Probably he has simply moved somewhere else without you noticing. They are not usually down there when the weather is extreme so being washed off is unlikely. But one can slip. The worst scenario is when all you can see is his coat or his tackle box. That really does make you wonder – I have had it happen once and was most relieved to see him wander back into view and casually bait up again.

Which brings us to the next question. In a case like this do we leave the Lookout and go and look over the top of the cliff to try and see him? Our ‘Standing Orders’ say ‘No’ – you never leave the Lookout’. But why? Surely if the problem could be solved by a few minutes searching on the cliff top then that is the thing to do. But if you leave the Lookout you leave the Radio and the telephone and no one can contact you. You can argue this point round and round and I can assure you we have done . But ‘Standing Orders’ win. Your purpose in  being there is twofold (1) to provide visual cover over the whole area and (2) to be a contact point to receive and pass on messages or take action on them. The yachtsman whose gas stove has exploded (unlikely but not unknown) may have only a few seconds to put out an emergency call. The man whose fast motor boat hits a large log at 22 knots may have but one chance to transmit before he is clinging to that log in the water. You may be the only person who might hear him. That is the reason we have our radio on all the time. Radio reception and transmission is not an exact science and for all the sophisticated equipment and highly trained personnel at Falmouth Coastguard it is not impossible that they might miss a Mayday message. We are but a small cog in the system but we could be the vital one. So – you do not leave the Lookout unattended.

We do not do this… 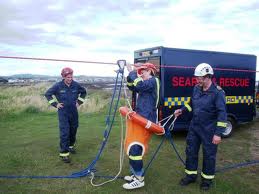 But hang on- might there be such a case when your judgment says ‘There is a man in the water down there. Do I just leave him’  There is a very good piece of advice which says ‘Orders are for the guidance of wise men and the obedience of  fools’. Put a bit shorter it means Common Sense should prevail. Last year there was a lot of criticism in the Press about members of the Emergency Services who stood by while someone drowned as their instructions were that they must conduct a Risk Assessment before doing anything and they were not trained in water rescues. At our Meeting someone said , ‘But what if it were to be said that because we obeyed Standing Order someone drowned?’ The point was taken and it was agreed by our Committee of Wise Men (Senior Watchkeepers to you) that one could not just stand by. After all, we would be recuing one casualty and it would be very unlucky if another turned up at that very moment. Too much of that and they would have to start a queue. So the upshot was that we now have a very sophisticated throwing line which nestles 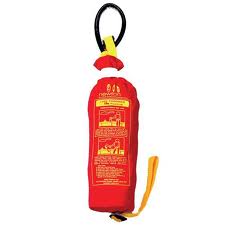 coyly in its holder below the chart table ready for the first angler whose catch proves too strong for him. This still does not mean that we should abandon the Lookout to go looking for trouble or a prolonged cliff search. It does mean,  however, that if someone is in the water below us and in sight we can do something about it.

I wrote about this for one other reason;- to demonstrate that our monthly meetings do have some purpose. Everyone puts in their two pen’orth and everyone listens. It is not simply Training – part of the time is devoted to the experiences of others and how people think we could improve the service

While on the subject, if you are a local angler and using the cliffs in question just call in and see us when you leave to let us know you are OK. We can then show you the log in which your arrival may be recorded. Better still, we might be able to persuade you to spare a little of your time and join us. Once again Pat Rigley’s number – 01872 501838