The Most Dangerous Profession? 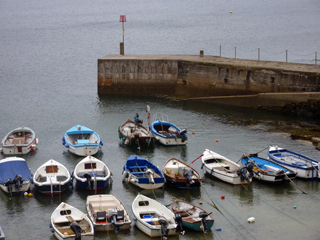 We have had our new windows installed since we opened this season and by the time you read this the official ‘opening ceremony’ will have taken place. Sarah Newton M.P. has agreed to do the honours, hopefully the Press will be there so you will all have been able to ‘read all about it”!

One of the commonest sights we see from the Lookout are the local fishermen in their small boats. They are a mixed bunch, some professional with registered boats and some recreational boats in the hands of local residents who are regulars on our waters. We know all of them by sight and exchange waves when they pass close in. They find it comforting to know that during the daytime of the summer months there will be someone up there keeping a casual eye on them.

Recreational or professional they are experienced enough to know that you can never be sure of what might happen at sea, that the best prepared boat can suffer a mechanical breakdown, that a moment’s inattention with a knife can result in a severe gash, and that concentration is essential when dealing with a rope running rapidly out over the side. They may only be small boats operating inshore but most are single handed with no-one to help when things go wrong.

Fishing at sea is one of the most dangerous occupations with a high casualty rate. While inshore boats are not handling huge nets of fish hauled in by thrashing chains on a powerful winch they are still using net haulers to help them set and retrieve lobster pots and nets. When setting a net the long ropes on deck are a trap for the unwary, the fatal mistake being to stand in the bight of the rope as it lies on deck. 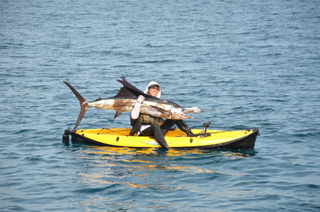 I remember being in Tarbert, Argyll, one year when the maroons were fired and the lifeboat launched. A forty foot crabber with two men on board had been setting the line of pots, the boat moving gently forward under its own power so the pots went down to the bottom in a straight line. They had done it countless times, throttle and steering set, the boat looking after itself as the men handled the pots on deck to ensure they fed out correctly.

A careless moment and one man put his foot in the bight of the rope just as it tightened. It grabbed him round the ankle, tipped him up and pulled him over the side, helplessly tied by his boot. His colleague’s first reaction was to try and grab him and hold him back, then, as he was wrenched from his grasp, to rush to the cuddy to stop the engine – but even then the boat still had way on and, when he looked again, the unfortunate man had disappeared. It took about 30 seconds and he had no chance. The lifeboat recovered his body.

While there are obviously visitors who bring down their boats and then go fishing there is one particular group who always fascinate me. They go out in kayaks and fish from these! I suppose if you are an experienced kayaker there is nothing particularly strange about this but to the uninitiated it seems highly complicated. There you are, usually in a single kayak, sitting at water level with a sort of apron thing tied tightly around your waist, setting off into the blue with long fishing rod equipped with nasty sharp hooks on the end. 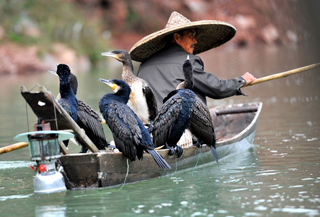 What happens to all of the other paraphernalia that fishermen usually carry? Do you carry bait, wriggly worms around your feet? How do you change bait? Above all what happens when you catch something? Sea fish are slippery things, some have nasty sharp fins, others bite. What do you do with your catch? The thought of a conger eel down between your knees does not appeal and even a fair sized pollack would be uncomfortable. These people go a long way out and are often a tiny dot invisible to the naked eye, calling for a lot of binocular work to keep them under observation.

There are dozens of different methods for fishing at sea or big rivers and lakes, all apparently developed to fit the local conditions and making use of the materials available. Common is the use of a fine weighted circular net where the fisherman rows out to his chosen spot and then, standing up, whirls it round his head and casts, the weights opening the net out before it lands on the water. The weights sink the net and trap the fish. The boats are small so you need good balance, considerable skill learned from childhood, and an area where fish move in shoals close to the surface.

In the Far East fishing with cormorants is common and you see the fisherman row out with perhaps several birds sitting on the prow of his boat. The birds have a string around their necks which is loose enough to allow them to swallow small fish but not large ones. If they catch a big one they are trained to return to the boat where the catch is removed, the bird given a fishy reward, and then back to work. The relationship between bird and man is quite remarkable, they are almost pets.

I once watched a man in Malawi fishing in a river just at the outfall to a lake. He was standing up in a canoe carrying a large Y-shaped device with a net strung between the poles. One pole over his shoulder, the other in his hand, he dipped the net in and out of the water, sometimes successful, sometimes not, but with the patience shown by anglers everywhere. The water was a muddy brown and I could see nothing but he would catch enough to feed his family and, perhaps, sell to the neighbours. 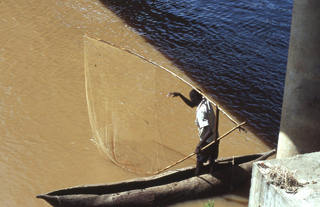 Even in this country we have strange fishing methods. The Solway Firth is wide, sandy and fills and empties twice a day. Large poles stand permanently out in the sand with nets strung between to catch the flounders as they make their way in and out of the Firth on the rising and ebbing tide. One village even has a yearly competition where the locals go out as the tide ebbs, in the last few inches of water, to see who can catch the most fish by standing on them as they hide in the sand!

In Bridgwater Bay on the Somerset Coast there used to be a similar system, though the terrain is very different. The Solway is hard sand but Bridgwater Bay is deep mud. The traditional way was to make up a crude wooden sledge like a wheelbarrow without wheels which could be pushed out over the mud without sinking. The fisherman would wear sort of snow shoes and would then push the sledge out over the mud to where he had driven in stakes with lines and hooks strung between. 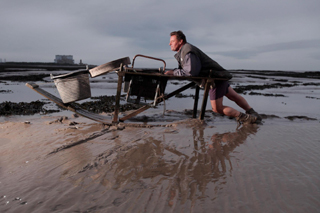 He would gather the catch and re-bait and wait for the next tide to produce its bounty. There used to be many families fishing in this way but, sadly, the last man is now approaching retirement and there appears to be no successor. It was a dirty, lonely and dangerous way of fishing, the mud would drown you if you left the sledge, but, in a poverty stricken, isolated area, man has to eat.

I have written about the Bristol Channel before, where the second highest tide in the world, roars up and down the estuary twice every twenty four hours. At Weston-super-Mare a rise and fall of 45 feet is a regular event. Down here a big spring tide is about 18 feet. On foot you cannot outrun a Bristol Channel tide because the mud will not let you!

Yet around the area of the Severn Bridges men used to catch salmon using lave nets. These are like overgrown lacrosse nets, large Y-shaped yokes with a net strung between, similar to that used by my African friend mentioned earlier. You tucked the shaft under your arm, waded waist deep into the early rising tide, and turned the net to face the salmon swimming up the estuary.

Sadly both of these traditional ways of fishing are now dying out. Few young people want to learn how to fish in dangerous and dirty mud in freezing conditions and environmental controls to conserve salmon stocks have so limited the possible catch that it is impossible to make a living. Locally though we are maintaining a very depleted inshore fishing fleet. Only a couple of boats now operate out of Portloe, three or four out of Portscatho. 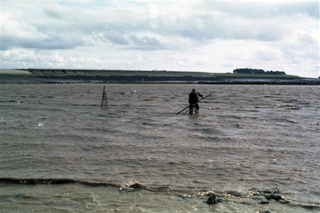 A far cry from the days when old photographs show a dozen boats, several of them working under sail. Still, so far as we in the Lookout are concerned, there are still enough local boats to watch over and still enough friendly fishermen to give us a wave as they pass by. Blackrock Lave Net Fishermen Association, carry on a tradition that has a unique cultural and historical

Looking through our Day Book yesterday I was struck by the fact that this year appears to be the year for beach, cliff and rock incidents. The Coastguard Cliff Rescue teams have been very active with a range of calls from illness on the beach, cliff injuries and people stuck on the rocks. These rescuers are volunteers just as we are and it shows that without people who are prepared to give a little time to help others the Emergency and Rescue Services would be in dire straits.

So give it some thought. The Coastwatch group at Portscatho could do with a few more volunteers. It is not difficult, we have men and women of different ages, we are a sociable lot and won’t ask you to be a human fly and dangle over cliff on the end of a rope. But you still might be instrumental in savings someone’s life. Sue can tell you all about it on 01872-530500 or Chris on 01326-270681.