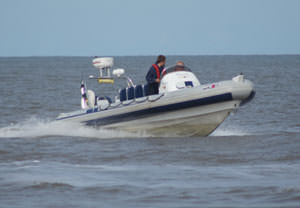 Well, early in the season and we have had our first incident. On 3rd May a radio message from MRCC (Falmouth Coastguard) was overheard at the Lookout to the effect that they had a report of a RIB with engine failure off Towan Beach. Our Watchkeeper looked in that direction not expecting to see anything as Towan Beach is out of our sight.

He found that he could see a grey RIB with two men in it stationary in the water off Greeb Point, our furthest visible bit of coastline, and was fairly confident that this was the Casualty. He then telephoned MRCC to say that he could see what he thought was the Casualty and gave its location. MRCC then then passed this information out over the air to the ILB (Inshore Life Boat) and this enabled them to find the RIB without undue searching.

Now this was a very minor incident but it did show up several points. First the Casualty gave a wrong location which is not uncommon. There are no signposts at sea or labels on the headlands, many of our seagoing visitors are just that – visitors. Secondly the value of the Pendvaden Lookout was illustrated – MRCC cannot see into Gerrans Bay because of the land so we become their eyes – and voice if they need to transmit to a Casualty as there is a radio black spot for them when close in.

Thirdly the Casualty in this case called the Coastguard on a mobile phone as the RIB had no radio. Now this worked initially but as the RIB drifted closer to the shore the phone signal was lost, something which happens along most of our local coastline, Thus, with no radio and no phone they were incommunicado. Had they been carrying a portable radio though they could not have talked to MRCC there were several motor boats and yachts seaward of them who would have heard any call and could have towed them away from the rocks.

As an incident it was very small but that was largely due to the weather conditions. Clear weather, a Force 4 WSW wind which is slightly off the land, a calm sea and no problem. Change the wind direction to South or South East, notch it up a wind strength and the situation is very different. 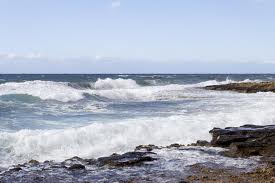 Waves and swell would rapidly have driven the vessel on to the rocks. If they were lucky they would strike at a flat patch and just walk off the boat. But the sea is relentless and the waves, even small ones, would still come in and pound the RIB hull onto the rocks. It does not take much of this treatment to fracture a fibreglass hull and the fabric of the air tubes is not designed to be a cushion. Ten minutes of this and the RIB could be a write-off and an engine worth several thousand pounds destroyed.

The natural inclination of a boat owner in these circumstances is to try and hold the boat away from the rock, but a RIB like this with its engine will weigh getting on for a ton. To the sea it is a toy to be tossed about. To a man, even two or three men, up to their waist in water, it becomes an unstoppable force. The engine sticks down below the stern and is a lethal pile driver capable of crushing a foot.

A man loses his footing, the sea lifts the boat and drives it in and the man is underneath, caught between the hull and the pounding rocks. Even a few hundred pounds of hard hull rising and falling on a man’s body trapped on sharp rock, underwater so he cannot breathe, is more than the human frame can stand. This is not a fanciful tale- it has happened several times and lives have been lost. The golden rule in a situation like this, get off the boat, walk ashore and leave it. That is why, as the advert used to say, ‘Get the Strength of the Insurance Companies Around You’.

This same weekend we have had our DFS assessment, our yearly exam by an Assessor from elsewhere to ensure that we are professionally efficient and can be counted as a working member of the Emergency Services. It’s a pretty friendly affair, the Assessor is not out to trap you and allows for nerves and the fact that it is a false situation – what in the Army we used to call Tactical Exercises without Troops. 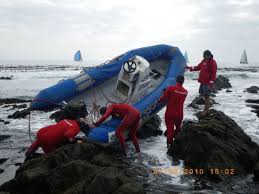 But why is it the brain ceases to function when someone asks you a simple question in these conditions. I have sailed my own boat for over fifty years and plotted thousands of fixes on a chart. Yet I still made a complete muck-up of one I tried to do that morning and, after two attempts to write it in the Log Book I gave up! I was asked a question about Ordinance Survey maps. We have one in a drawer but an even larger one pinned to a table top under glass there and visible all the time. Yet brain opted out and I spent time trying to find the one in the drawer and then could not even find the right drawer!

However the Assessor was very understanding and patient and all went well in the end. Probably making allowance for geriatric deterioration at the end of the day he went away satisfied and we are Certified for another year. As I have said several times, we are amateurs working to a professional standard, retaining our sense of humour and feeling that we are doing something for the Community. Why not come and join us. We still need volunteers. Give Pat Rigley a ring – 01872 501838