Everything Is Fine… Until It Goes Wrong 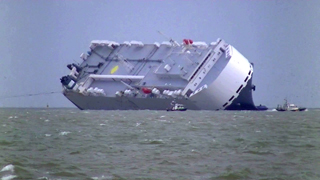 The news that the large car carrier Hoegh Osaka which was beached in Southampton Water was coming to Falmouth for repair set me thinking of the difficulties man has had through the ages with repairing ships. They are not exactly light and, deprived of their own power, are cumbersome and difficult to handle. They go down into the water easily but bringing them back up is a different matter.

The galleys of the Mediterranean were no doubt hauled up ancient slipways by gangs of slaves. The Vikings probably did the same thing and early European ships were handled in the same way, not strictly by slaves, but hundreds of dockyard workers paid very little. Research of old slipways shows marks of a long channel in the centre of the slipway to take the keel and the hull would have been supported on wooden rollers, everything well greased.

In the case of Hoegh Osaka she is not to be dry docked as she is not thought to be severely damaged. She will be examined from underneath while afloat by divers, sophisticated equipment, lights, no doubt electronic probes and things. Minor damage can then be repaired underwater – yes, it is possible to weld underwater. Before the last war such practices were unthinkable and a vessel had to be dry-docked in order to properly examine the whole hull. 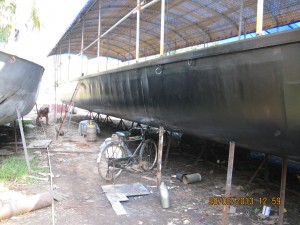 Sometimes, places like the Bristol Channel where you have a 40ft rise and fall to the tide, the ship could be simply floated into the dock and the outgoing tide would leave it high and dry. In others it had to be pulled up a slipway, gates closed and water pumped out. The ingenuity of our forefathers new no bounds. In my research for this article I found an article in a scientific magazine which stated that there is no limit to the size of what man can lift and handle. Some of the blocks which form the pyramids in Egypt weigh over 50 tons- and there were none quarried locally!

Ships do not only require repairs – they need regular maintenance. Any yachtsman will tell you that the bug-bear with a boat is bottom fouling – weed, barnacles, marine micro-organisms which stick to a ship’s bottom. Left long enough and they slow the ship down. A year is about the maximum time before it needs cleaning and, in tropical climes, this is far less.

Bearing in mind the length of time that ships could be away from dockyard facilities in the days of sail it would be necessary, on occasions, to find some way of cleaning the bottom. This was done by careening the ship. A suitable sandy beach was found and the ship run aground at high tide, after a careful calculation that there would be a tide in the near future to re-float her. As the tide went out the ship heeled over to one side until she rested on her bilge, the opposite one exposed to the air. The crew then went to work with scrapers and brooms to clean the exposed side.

Assuming the job could be done in one tide when she floated she was then dropped on the other side and the operation repeated. But simply heeling the vessel over was the easy bit. Many of these vessels carried cannons – she might be a warship. Two tons of cannon does not like being suspended in the air on ropes on the high side of the ship so these had to be manoeuvred across to the downside before she tilted.

The same with the ships spars. These would have to be sent down and secured on deck, and all heavy stores, furniture, etc, secured. Then, to turn her on the other bilge, everything had to be hauled back across to the other side. Some warships carried 40 or more guns, so it was small wonder that captains had to find somewhere secure or hidden away to careen ship as she would be helpless for a week or more.

It was not only ships at sea which gave man problems. Look at those pictures of man’s early attempts to fly. Ignoring Icarus, who, one might say, was successful till he got too near to the Sun, a gentleman by the name of Henson even built a steam powered plane. History does not tell us where he kept the coal, and, as it was unsuccessful, it is listed as another ‘failure with good intent’.

A Frenchman used twisted rubber bands, a design familiar to many boys of the twentieth century. All of these people contributed something and the Wright Brothers used much of their research and experiences in making the first successful powered flight. Wait a minute – the Wright brothers were not the first people to make a successful powered flying machine. John Stringfellow did it in Chard, Somerset, in 1848, but it carried no pilot. Orville Wright made the first manned flight in 1903.

Even the mundane and willing horse could give Man problems. They were the commonest means of powered transport for many centuries. There were thousands on the streets of London up until the late 1930’s and did not disappear up until 1960’s. Remember the milkman’s or baker’s horse which knew the round better than he did? They got into all sorts of trouble, slipping and falling over, shying at loud bangs and bolting up the street.

I joined the metropolitan Police in 1954 when real policemen were a common sight on the streets, and in training we had to learn a wonderful book called ‘The Metropolitan Police Instruction Manual’ It covered everything from prostitutes to pigs to pawnbrokers. I was always somewhat intrigued by the section which covered ‘How to stop a runaway horse’. It began ‘Start off by running in the same direction as the horse.’

I must come out of my dreams and back to the N.C.I. – but it’s not unrelated. At our last meeting we had a talk from Bob Warren of Paddle and Sail and he showed us the two types of craft which he operates from Porthcurnick Beach. While these craft are inherently safe and are limited to the area inside of Pednavaden and Pencabe Points he and his staff can have no real knowledge of the skills of the person hiring them. 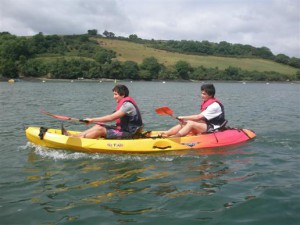 The kayaks are fairly heavy and stable but you need to be experienced to ‘re-mount’ should you tip it over. Because of their weight they can be difficult to handle in strong winds and heavy surf and, if the paddler falls out and the kayak is thrown about by the surf, it could injure others in the water nearby. His staff are always on the alert for this happening. The paddle boards are lighter and are attached by a strap to the paddler so should he fall off he cannot become separated from the board. Easier to remount and more stable as they are flat they can be paddled by hand by a person lying on the board.

All this information is needed by us as we see these craft regularly in the bay. Knowledge of the potential difficulties makes it easier for us to spot someone who may be in trouble and it is hoped that we may be able to establish a two- way radio system between the Lookout and the member of his staff on the beach.. If it all works out it will be another safety net in place.

We may never use it but the more we can do to ensure the safety of small craft and swimmers around the Lookout the better for all concerned. Come and give us a hand. If we get a few more volunteers we can open seven days a week during the summer and that will make things even safer. To find out more give Bob a ring on 01872-580720 or Robert on 501670

Pictures by courtesy of Wikepedia and Paddle and Sail