It was a fantastic day, one of those which only come two or three times a year. The sun was out, a light wind from the north, and the air crystal clear with none of the haze which so often mars summer sunshine. The sea was flat with just a slight wave and I could see the yellow buoys of the firing range, far out on the Eastern horizon. Charlie Buoy is nearest at about seven miles and Bravo Buoy the furthest at eight and half miles. Alpha lies about a couple of miles to the south west.

Visibility was so clear that through our large telescope I could see their waterlines, the little waves breaking around them. Magic!. The gunnery range lies in a roughly south westerly direction from a few miles off Fowey down towards Lizard and came into use in the mid 1990’s. Before that Naval ships used the range off Wembury Point the other side of Plymouth, but it was decided to close this and create the new one for use by all NATO ships.

There are two types of gunnery ranges operated by M.o.D, mandatory and non-mandatory. They may be for ships or land based firing out to sea and a mandatory range is closed to all vessels while firing is in progress and is policed by a range safety vessel with powers to enforce all other craft to keep clear. A non-mandatory range is a polite way of saying, ‘Please keep out of the area as we want to fire shells down it.’ These too have Range Safety Vessels but they can only request a civilian vessel to keep clear. It seems almost as effective as most craft know in advance where the range is and set their course to avoid it. Firing times are broadcast in advance by radio and are put in the local press. But there are always the exceptions. 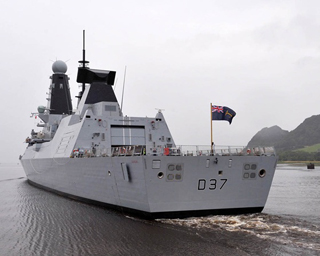 This day was one of them. I had seen the very large, white motor yacht come up from the Falmouth direction heading up channel. He showed on the AIS (Aeronautical Information Service) receiver in the Lookout which gave his MMSI number (Maritime Mobile Service Identity), the unique number allocated to every vessel in the world which has a DSC (Digital Selective Calling) radio. (I sometimes wonder how long it will be before we communicate completely by capital letters!) This told me his exact position, his course and his speed.

I had been idly watching and plotted him on the chart for something to do, a bit of practice, when all of a sudden the radio awoke! A voice said ‘This is Royal Naval warship ‘Duncan’ to vessel approaching Dodman Range’. Dead silence. Duncan then came up calling Range Vessel ‘Mars’. I could see ‘Mars’, an Admiralty tug, also on the horizon. ‘Duncan’ complained to ‘Mars ‘that a largish vessel was approaching the Range just as ‘Duncan’ was about to bowl. Please try and do something about it.

I watched fascinated. It was unusual to be able to hear both sides of the conversation as, more often than not, geography dictates we only get one side. I knew ‘Duncan’ was the Navy’s newest warship, a Type 45 destroyer, the latest to be launched and the final one of the class. I could not see her as she was hidden by Dodman Point, but she was obviously ‘working up’ for her first deployment and trying out all her toys – and here was an inconsiderate bystander walking straight across the pitch!

Now ‘Mars’ began calling the intruder, at first by her call sign and then by name – she had obviously looked up the MMSI number. The white yacht completely ignored her – then- to make matters worse- altered course to head directly towards Charlie Buoy, apparently completely oblivious to the fact that she was spoiling the Navy’s game and tea time was fast approaching. There were more plaintive cries from ‘Duncan’ and ‘Mars’ now set out to try and cut the intruder off. She had no chance. The yacht was doing 16 knots and ‘Mars’ is a tug. 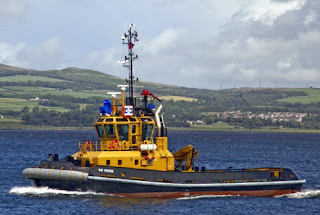 Tugs are built for power not speed. Nevertheless she produced a most impressive bow wave, a great creaming moustache as she ploughed through the water. But it was like watching a hefty rugby full back one side of the field who suddenly realised that the opposing fly-half had the ball and was running down the opposite touchline. Then – at last. A call from the yacht, ‘You calling me?’ but in the appropriate radio language. After a brief conversation ’Mars’ realised that the yacht was already in the Range and it would be quicker to let her cross than to turn back. A brief report back to ‘Duncan’ where the Captain, one imagines, told the gun crews to get a cup of tea while they waited.

So there it was. All laid out for me to watch and hear – most unusual. Twenty minutes later the yacht was well clear and I heard ‘Duncan’ come up to warn ‘Mars’ that she was about to fire. I heard the distant report of the shot but, try though I might, I could not see the splash by the buoys. Our telescope is powerful but not that powerful and the shells were probably not explosive but concrete or plastic missiles. We do not normally hear the firing as the wind has to be in the right direction and just the right strength to carry the sound – too strong and its own noise drowns out the sounds of the shots.

Incidents like this all add to the interest. You get the chance to see how our equipment works, how ships talk to one another, the opportunity to make a plot on the chart for practice sake – even keep a running course if you want to. This is so different to our ‘classroom’ training. You can see the ship you are tracking, you can use ‘guesswork and estimation’ to plot it, try and work out its course and then look at the AIS screen to see if you are right – or how far out you are. We all need practice – it is surprising how lack of use makes you rusty.

I sailed boats for over 40 years yet, to my horror, on this occasion I realised I was trying to work out the bearings with the chart plotter the wrong way up! That will never do if you find yourself in the situation where you have a man in the water, a speck which is difficult to see, and to get help you are going to have to tell the Coastguard and Lifeboat exactly where he is. 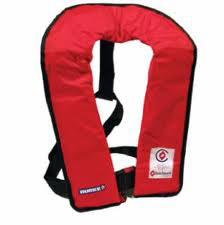 We are coming to the end of an eventful year. It started quietly but built up. None of our ‘incidents’ has proved life threatening but we can say we have helped quite a lot of people. It’s what you might call ‘bread and butter’ stuff, watching over the swimmers, the sail boarders, the kayaks, the paddle boards, and all the rest, the majority of whom are competent, sensible and safe, though we would like to see more ‘small boat people’ wearing life jackets.

We have just completed a survey for the RNLI and find that there are still a lot of boat users not wearing them. They are probably perfectly confident and sensible people with the attitude which we all have – it can’t happen to me. Then your dinghy goes over – it happens to all of them sometime – and a swinging boom catches the side of your head. Unconscious, even dazed men, don’t float very well or, if they do, it may be face down. How long can you hold your breath? Point made?

By the time I write the next one we will be in our winter programme of talks and training. Over the last eighteen months we have taken a serious look at how we train and we think we have a better system with dedicated trainers who have all begun and learned ‘on the job’, so they know what they are talking about and how difficult and bewildering it sometimes seems. But it’s not – practically anyone can do it. Give Robert a ring on 01872-501670 or Bob on 580720. They will tell you the bare bones over the phone and suggest you come down for a chat. We still want to be able to open seven days a week.