Now You See It – Now You Don’t

A couple of months ago I delved into the mysteries as to why a concrete or metal ship will float. If you remember it all came back to Archimedes playing in his bath and pondering why, when he got in, the water level rose. From there he worked out that a body immersed in fluid is buoyed up by a force equal to the weight of water displaced. Note that the important word here is ‘displaced’ . If you take a sheet of iron weighing one ton and put it in water it will sink. Hammer that same sheet so it is thinner and make it into a boat shape and it will float because its area is much bigger but it still weighs a ton. It displaces more water because it is bigger than when it was a simple sheet.

Now we understand why boats float let us think about why they sink. If the water is allowed to flow over the sides of the boat it will be contained by the hull and make it heavier – the iron sheet plus the water held inside the hull. Put enough water in and the weight of the water plus hull will exceed the amount of water the hull has displaced so the upward floating force will cease to be enough to float the object. It will sink.

It can be very inconvenient if your boat sinks under you but it was not long before Man realised that there was an advantage to be had by concealing yourself under water. From ancient times breathing tubes were used by men to get close to unsuspecting waterfowl when hunting. These tubes were probably a hollowed out reed. In 4th Century BC Aristotle, who was a naturalist, used such a tube to study underwater life. 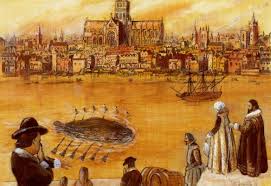 The snorkel is not a new invention! There is a report, published in 1562, of two Greek gentlemen who, in the presence of the Holy Roman Emperor, submerged themselves in water without getting wet and holding a flame in their hands! Then again, in the 1578 William Bourne, and English mathematician, wrote about plans for an underwater navigation vehicle and, in 1596 John Napier, a Scot, talked about an underwater vehicle capable of inflicting damage on one’s enemies.

So underwater vehicles are not a new idea. The first reliable account of one is that built by a Dutchman for King James 1 in 1620. It was propelled by oars. A pictures shows it being rowed on the surface though I imagine rowing underwater was something of a challenge! Over the next hundred years interest continued and many rather strange ideas were put forward. In 1747 Nathanial Symons designed one which consisted of a tube intended to house the crew with large leather bags alongside.

If you flooded the bags the boat would submerge and there was a mechanism to wring the water out of the bags in order to surface. It was not until 1864 that the first really successful vessel was built. In the American Civil War the Confederate Navy built ‘H.S.Hunley’, the first warship to sink another with a torpedo. She sank a Union Navy sloop but was herself destroyed – possibly being too near to the explosion 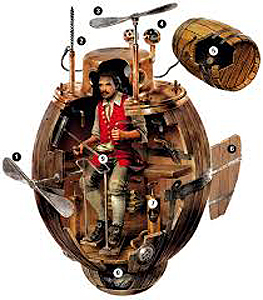 The successful submarine needs an enclosed watertight space for the crew and a means of increasing or decreasing the weight of the vessel. This is done by attaching tanks to the side of the crew compartment which can be flooded, thus making the ship heavier, and a means of pumping the water out again to re-introduce buoyancy. That is all there is to it in its simplest form but this means you only have something which can go up and down and is unable to move under its own power.

This was the big stumbling block. Internal combustion engines use an awful lot of air which is mixed with the fuel to make an explosive mixture. This goes off bang and the force of the explosion pushes the pistons up and down. So you can make it move on the surface without difficulty by giving it an engine which is in open air, but if you used that engine when underwater it would suck up all of the air inside and the crew would suffocate. An Irishman came up with the answer in 1896 perfecting a battery powered motor which did not require air to operate.

So now, at the beginning of the 20th century, you had the first credible submarine capable of offensive against another warship. This was just before the start of the First World War. British Naval power was at a height never seen before or since. The Admiralty was committed to the concept that might was right and the bigger the ship the greater certainty of winning. They were aware of the torpedo but considered that it was best delivered by surface ships like destroyers and torpedo boats. Undoubtedly there were some in high places who though that the submarine was a somewhat unsporting weapon as it was concealed! Let’s all have bigger ships with bigger guns so we can slug it out like gentlemen on the surface. 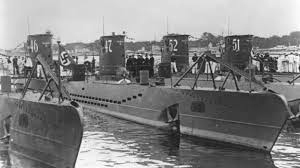 Germany, on the other hand, had no scruples about undersea warfare and were busy developing a fleet of submarines which, they boasted, would soon dispose of the British fleet. They very nearly did too and, without going into the War in detail, the tactic of sinking merchant shipping nearly won the day. Then the same thing happened in the run up to World War 2 – but by now submarines were getting bigger. The French and the Japanese even built subs which could carry airplanes! Of course they had to be on the surface to launch them and recovering them afterwards was probably not possible.

War, though, is not the only use for a submersible vehicle. The marine scientists thought it was just the thing to go exploring the deep. Aristotle had used a tube in his mouth to study the seabed but this did not get you very far once you got out of your depth. Primitive diving suits had been invented and were used to go deeper but water is very heavy and it produces a crushing effect on the human body. Go too deep and your unprotected body will be squashed. A submersible container was needed which could accommodate a crew. 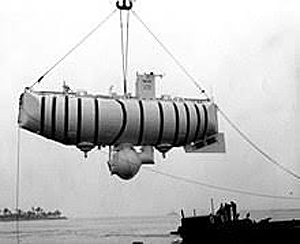 It is necessary here to differentiate between a submarine and a submersible. A submarine is self supporting and not attached to the surface in any way. A submersible is a container which is supplied from the surface with air and power, usually lowered up and down by cables. The crew sit inside and view the outside world through strong glass, sometimes operating external ‘limbs’ to do work. They can also be used as an observation vehicle so they can guide a robot to do a task.

Submersibles can reach great depth because of their surface support. The deepest part of the ocean is the Mariana Trench in the Pacific Ocean off Japan and the Philippines. It has a maximum known depth of over 6 ¾ miles! If you dropped Mount Everest into the Trench the top would still be about a mile under water. The furthest point we can see from the Lookout is about 9 miles out to sea. The depth here is about 230 feet and that is about the average for the English Channel. So you won’t see deep sea survey ships out there – unless they have come to Falmouth for a refit.

There was recently an incident involving an inshore survey and diving vessel though we were not directly involved. On 4th October a 40ft boat was on its way to a commercial dive at Plymouth when, between Nare Head and Dodman, a compressed air cylinder exploded and two of the three crew were injured. The Coastguard picked up the ‘Mayday’ and the Falmouth and Fowey All Weather boats were launched, shipping in the area alerted, and the Coastguard helicopter was sent. 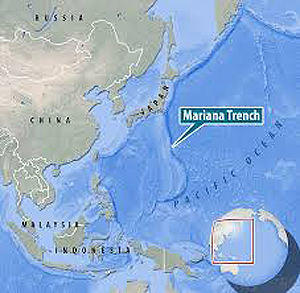 By the time the Falmouth boat arrived the Fishery Patrol vessel St Piran was alongside and the helicopter had dropped a paramedic on to the casualty to deal with the injured. Our Watch Keeper picked all of this up on the radio though was a bit frustrated as most of the action was hidden from his view by Gull Rock. It was a classic case of co-operation between the Coastguard, the Rescue Services, the Royal Navy and civilian craft. There was no fatality and the boat was towed back to Falmouth. On this occasion we were not called upon to assist in any way – but it did enliven the afternoon watch!

As we come to the end of the season the Training Team start limbering up to deal with our winter training programme, not only for new recruits but also monthly exercises at our winter evening meetings. These are ‘fun affairs’ but nevertheless often cause even the longest serving members to stop and think. In fact I often find that I am ‘beaten’ by the newly qualified members. We don’t keep score and it’s all very light hearted but it does make you realise that it is easy to forget something if you do not do it all the time. We are hoping for more recruits to boost our numbers so give Sue a ring on 01872-530500 or Chris on 01326-270681.