Fair Sets The Wind For France! 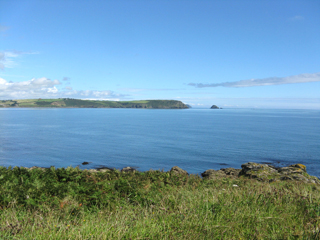 The first part of this season has been very quiet but suddenly it has gone mad. Within about three weeks we have had a dog over the cliff, a vessel on fire and a helicopter trying to effect a rescue on the wrong beach. The dog made its own way unharmed to the bottom leaving it owners a long walk to retrieve it.

The ship on fire only had severe problems with its diesel engine, resulting in great gouts of smoke. The mis-directed helicopter rescue was nothing to do with us but came about because a visitor was not sure where she was, making her call direct to MRCC.

The first our Watchkeeper knew about it was Rescue 193 buzzing around his head and the sight of a Volunteer Coastguard rushing about the beach apparently asking people if they were drowning. It got sorted out in the end but was a lesson in the need for accuracy in describing locations.

There was, however, a fourth incident in which our Watchkeeper was very much involved. Coming on duty and making a routine sweep of the horizon to check on what was happening he saw a small inflatable in Gerrans Bay between Carne Beach and Nare Head. It carried two men and  was using an outboard engine. Nothing untoward but worth keeping an eye on as, though the sea  was flat, a moderate NW breeze was blowing out to sea.

Completing the rest of the essentials for the start of a watch, filling in logbook etc, he took another look at the inflatable. This time he could see one man standing up, pulling at the starter cord of the outboard that, for some reason, had obviously stopped.  Standing up in a small dinghy of any sort is not a good idea and a particularly bad one in a small inflatable. Though very stable but they are so light that, should the engine start in gear or the cord break they can move sideways very suddenly, throwing the ‘standee’ over the side. Wooden dinghies with a small keel have some sort of grip in the water but flat-bottomed inflatables skid easily. Still no real reason for alarm as nine times out of ten the motor will start and all is well, though he now realised that neither was wearing a Life Jacket.

A few moments later he looked again, this time to see that the men had swapped round. Obviously they were having difficulty in getting the motor to fire. Aware of the fairly strong offshore breeze  Robert now decided a close monitor was in order. A bearing, a distance calculation and he had a fix which, if necessary would tell the Coastguard exactly where the potential Casualty lay. It also meant that he could track their direction of drift. The way the wind was blowing it might be next stop France! One of the young men had started to row, but with little effect. 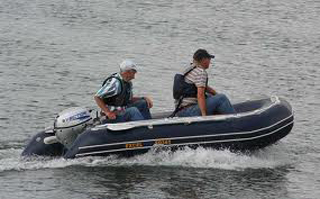 He then rang MRCC and told the operator what he could see. It was agreed that, at this stage, no action was necessary except to keep a close watch on what was happening. The men were not signalling any distress, the sea was calm as they were still in the lee of the land, and they might well get the engine started. At the next check, however, the bearing had changed enough to show that the boat was being blown rapidly seawards, the windage of the two occupants acting like a sail.

First bringing MRCC up to date Robert started a serious plot of positions as, if the situation did not change, some sort of action was going to be necessary. It was obvious that at this rate of drift they would eventually lose the shelter of the land as they passed the point of the Head. The sea around Gull Rock was choppy and combined forces of wind and tide could sweep them on to the Whelps.

The changing bearings still showed a continuing drift, now about a quarter of a mile. The two men were just sitting there, having given up trying to start the motor, perhaps resting before another effort with the oars. There was no doubt that, if nothing was done, before long they would be in the open sea and a small inflatable without power in those conditions is little more than a rather inefficient life raft. With no engine someone was going to have to go and get them.

At that point Robert noticed the wake of a high speed RHIB approaching from the Falmouth direction and identified ‘Seaquest of Falmouth’, the Orca Safari vessel on one of its daily wild life trips along the coast. He called MRCC, told them that the inflatable was still drifting and that ‘Seaquest’ was in the area. He suggested that a call from MRCC to the RHIB might result in the necessary rescue of the inflatable. MRCC agreed and the call was made.

Even then it threatened to go pear shaped. The first call from MRCC got through to ‘Seaquest’ and they set off to help. As they got nearer they called MRCC to ask exactly where was the casualty.. By then our tame Gremlin was in position – the fact that a lot of our area is a radio black spot and MRCC cannot hear a low lying vessel calling so they had no idea the ‘Seaquest’ was asking for directions.

Once more our position on the cliff top came in to its own and Robert, having kept an accurate plot running, was able to tell Falmouth exactly where the inflatable was and to ask them to pass that to the rescuer. He was gratified to see the RHIB change course and head down to what was now not much more than a speck to the naked eye.

End of the story? Well, ‘Seaquest’ towed the crippled inflatable back close to Carne Beach from where they could row in and then went on their way, probably pleased with themselves for a good deed done. Their passengers had had a small extra adventure to add to their experience and, no doubt, a lot of photos of the embarrassed pair.

The two men in the inflatable would now spend the night in their beds instead of bouncing about in the cold, frightening dark. Robert could feel the satisfaction of a job well done It was what we are there for, why we do all the chart work and training. Perhaps this time there was no actual threat to life but different weather? We see small boats gaily setting off seawards in far worse conditions than this. Perhaps they get comfort from the fact that someone is watching over them. And perhaps next time they will be wearing Life Jackets.