What is a ‘Bunting Tosser’?

Walking round our Lookout the other day I fell to pondering about the huge blocks of concrete and granite which lie just outside our walls. Obviously they were something to do with the original building when used by the Coastguard, in the early days probably occupied 24 hours a day. I expect there was a mast. I can remember the phrase, ‘A gale is forecast – South Cones are hoisted’ from my early BristolChannel days.

Before the time of universal radio on vessels all signalling was visual. Gale warnings were indicated by each Coastguard Station having a mast on which they could hoist a signal. They held the International ‘U’ flag – ‘You are standing into danger’ – two red squares on a white background – and the signals to indicate a gale warning. These were black cones and would be hoisted point upwards for a gale from a northerly direction and point downwards if it was from a southerly direction.

There was no provision for east or west. The division was straight across the map and a gale from the east or west would probably have a bias to the north or south so that would be the appropriate hoist. If dangerous seas were expected the cone was backed up by a black drum hoisted beneath. The system was devised by Admiral Fitzroy in the mid 1800’s and continued until 1984 when it was judged redundant in the light of radio communications.

Early signalling was all visual by flags – ‘England expects …..’ stuff. Naval ships carried expert signalmen, ‘Bunting Tossers’, a trade in itself, and a ships signal locker was rather like an overgrown wine rack with masses of partitioned cubicles to hold flags, each in their appointed place. 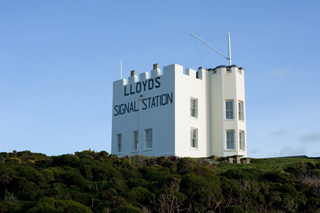 In the Merchant Navy things were a lot more informal and it would fall to the Officer of the Watch to use his telescope to decipher a hoist from another ship. Signalling from ship to land was the same principal and when I first went to work for a shipping company in 1949 very many voyages were shown as ‘Land’s End for Orders’. This meant the Captain would head for Lizard Point where Lloyds had a Signal Station. It was opened in 1883 by Lloyds of London to communicate with ships as the approached the English Channel. The Owners, by now knowing where they wanted the ship to go, would send a telegraphed instruction to the Signal Station which would relay this to the ship, by flags in the early days, when she came within visual distance.

As time and technology progressed radio was introduced but, because of the low power of early sets, Lizard Signal Station was still used to transmit the message when the ship got close. By the end of the War radios were good enough to signal world wide and in 1951 the Signal Station was closed as  redundant. The phrase ‘Lands End for orders’ is still used in the shipping world when a ship has no firm discharge port by the time it sails after loading. It simply means ‘Drive off in that direction and we will tell you where to go when we have made up our minds’.

It has, of course, always been necessary to pass messages over long distances but the limiting factor was eyesight. Even with a powerful telescope there comes a point where a message cannot be read with certainty. The news of victory at Trafalgar had to reach this country by way of a fast small ship, HMS Pickle, commanded by Lieutenant Lapenotiere, being dispatched from Nelson’s fleet to  sail to Falmouth. There Lapenotiere  disembarked and hired a poste-chaise to gallop to London with the news. The battle took place on 21st October, Lapenotiere landed in England on 4th November. He changed horses 21 times on the way and the news appeared in the London Gazette on 6th November. 15 days for the news to arrive. Now it would take 15 seconds! 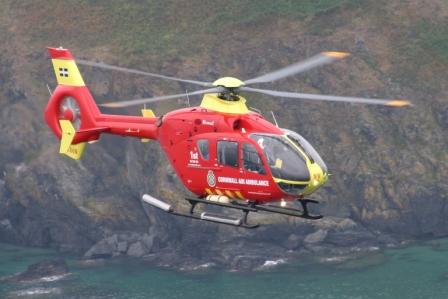 One must wonder if he would have been quicker to have galloped to Portsmouth where the Admiralty had established a system of Telegraph Towers linking the port to London  These were towers erected on hilltops which had moveable arms. The arms worked a bit like semaphore flags so that a signal could be passed from one tower to the next visible one, perhaps 15 – 20 miles away. The system had been devised by Sir Home Popham and the Admiralty had them built as a permanent and fast link between head office and their principal port. They were in use from 1822  to 1847 so existed at the time of Trafalgar in 1824. Perhaps Lapenotiere did not know they existed or refused to trust a ‘new fangled device’

How signalling has changed over 190 years! We no longer jump about waving flags nor go out and shiver in wind and rain, struggling with flapping halyards to get a wet and cumbersome cone up a mast. I have enough problems getting our flag up and down when its main ambition is to wrap itself around every projection it can find.

We pick up a telephone, punch a few buttons and can instantly speak to the Coastguard at Falmouth. Need  to guide a Lifeboat which is searching the bay for a casualty? No problem. Pick up the radio mike, tune to Channel 0, and away you go. Someone fallen on the Coast Path and fractured an arm? Once again the ‘phone and ‘999’ to the Ambulance Service. They have doubts they can get the casualty back to the ambulance on the road? Looks like a helicopter job.

Maybe the Ambulance Service will ask the Cornwall Air Ambulance if they can land in the field. Failing that speak on the ‘phone to Coastguard and they will organise Search and Rescue. A yellow or grey whirlybird will come over,  a nice man will dangle from a wire and up will go the stretcher on its way to Treliske. How easy things are compared with the 1800’s and  before

Only by having these gadgets can we do the job and it is only by training that we know how to use  them. At the moment we don’t struggle along the Coast Path in the rain to the Lookout, we sit in comfort around a table in Portscatho Memorial Hall. We take it seriously yet with humour. We all make fools of ourselves at some point in the winter but the laughter and ribbing that goes with it makes it easy to bear. None of us are infallible. Why not come and see for yourself. We will make you welcome, you see what we do and if you don’t like it you don’t come again – no hard feelings. Ring that number – 01872-501838 and speak to Pat Rigley.