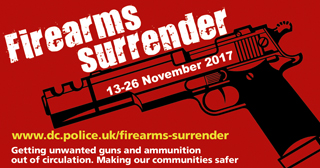 Devon & Cornwall Police is asking the public to surrender illegally held or unwanted firearms and ammunition to make our communities safer.

During the surrender period – 13 November until 26 November 2017 – those handing in firearms or ammunition will not be arrested for illegal possession at the point of surrender and they can remain anonymous.

The history of each live weapon will be checked for evidence of prior use associated with crime.

We want to take out of circulation any type of firearm and ammunition, which includes guns which can still be fired, antique or collectible weapons, replica weapons, air weapons, BB guns, stun guns and ammunition that are no longer required.

Many firearms may be overlooked or forgotten in people’s homes. These include trophies of war which have been inherited from a relative and stored in the loft or shed, or guns thought to be harmless antiques.

Some people may possess guns that they do not realise are held illegally. This particularly applies to anyone who is serving or who has served a custodial sentence and applies equally to antique firearms. Section 21 of the Firearms Act applies and can be read at the link below.

If you have even a shadow of doubt about the legality of a weapon or ammunition that you possess we urge you to hand it in during the surrender.

Full information about the firearms and ammunition surrender can be found online: www.dc.police.uk/firearms-surrender

Queries should be directed to 101@dc.police.uk.

Firearms and ammunition must not be left outside any police building if it is closed, nor handed in before or after the surrender period.