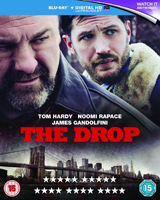 Based on a short story from Dennis Lehane this film follows lonely bartender Bob Saginowski (Hardy) through a covert scheme of funnelling cash to local gangsters “money drops” in the underworld of Brooklyn bars. Under the heavy hand of his employer and cousin Marv (Gandolfini), Bob finds himself at the centre of a robbery gone awry threatening Bob’s life and loves.

I saw this superb movie on the plane to the US and is probably one of the best, understated films I’ve seen in a long time. Superb performances by all characters, but the plot, story and screenplay is a delight, holding the tension from Fade in to credits.