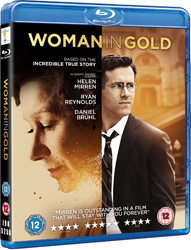 Based on the real-life story of Maria Altmann and her legal campaign against the Austrian government, Helen Mirren plays Altmann, who, since fleeing Europe during the Second World War, now lives in Los Angeles.

When the death of her sister leads to Altmann finding out that a portrait of her aunt painted by Gustav Klimt was stolen by the Nazis from her family home during the war and now hangs in the Belvedere Palace in Vienna, she enlists the help of young lawyer Randy Schoenberg (Reynolds) and embarks on a legal campaign to reclaim her family’s losses.

This is not Helen Mirren’s finest hour, by any means (nor Curtis’ for that matter). Although a hugely competent actor, this really isn’t her best role and nor is the story well told. Some jagged flashbacks to her childhood (some of which she could never have seen, so seemed shoehorned into the script for dramatic effect) tried to make what was a fairly simple story quite dramatic, but, for me, failed.

Even Ryan Reynolds, who has been in some magnificent roles of late, could do little to lift this rather drab story into something interesting. That said, it was quite watchable and the actors did the best they could with a bad story, but one really expects more from the heavyweights behind this.

Verdict: Watchable, but by no means anyone’s finest hour. ***

This film will be shown at The Harbour Club, Portscatho on Monday 3rd August.