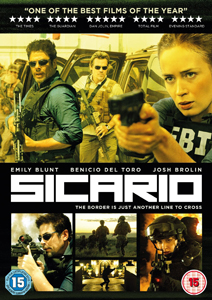 FBI agent Kate Macer (Blunt) is recruited by government official Matt Graver (Brolin) to join a team, led by mysterious consultant Alejandro (Del Toro), on a secret mission to bring down a drug lord in Mexico. The operation is fraught with danger and Kate finds herself forced to reconsider what she stands for as she tries to successfully complete the mission and make it out alive.

I do like Emily Blunt’s choices of films but this has to be one of her best to date. A truly original story, you’re kept in the dark along with the heroine as to what truly is behind her mission and the ending is as powerful as the 100 minutes that proceeds it. The film was nominated for three richly deserved Academy Awards including Best Cinematography and Best Original Score by Jóhann Jóhannsson. This is truly one of the best films of 2016 so far, for my measure.

Verdict: Top notch thriller that’ll leave you gripped and guessing from the outset. *****

This film will be shown at The Harbour Club, Portscatho on Monday 15th August.