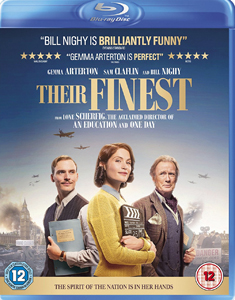 London 1940: With the nation bowed down by war, the British ministry turns to propaganda films to boost morale at home. Realising their films could use “a woman’s touch,” the ministry hires Catrin Cole (Arterton) as a scriptwriter in charge of writing the female dialogue.

Although her artist husband looks down on her job, Catrin’s natural flair quickly gets her noticed by cynical, witty lead scriptwriter Buckley (Claflin). Catrin and Buckley set out to make an epic feature film based on the Dunkirk rescue starring the gloriously vain, former matinee idol Ambrose Hilliard (Nighy).

As bombs are dropping all around them, Catrin, Buckley and their colourful cast and crew work furiously to make a film that will warm the hearts of the nation.

This crowd pleaser, like Hidden Figures, alone deserves credit for exploring a woman’s role in such an effort. Drenched in a sweet nostalgia, it only very rarely tips into sentimentality and is a romantic tribute to a bygone era when filmmakers happily made propaganda to help the war effort.

Verdict: A solid performance by Arterton & crew make this a must-see movie. ****

This film will be shown at The Harbour Club, Portscatho on Bank Holiday Monday 28th August