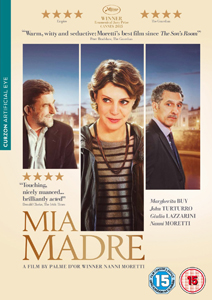 This Melodrama/Comedy see Margherita directing a film with the famous American actor, Barry Huggins, who is quite an on-set headache . At home, Margherita tries to hold her life together, despite her mother’s illness and her daughter’s adolescence.

Moretti’s films always score high with the critics and this strong, understated filmmaking is no different. A deep and serene reflection about death and family, this is a film about patience and sombertude.

This is another movie by the director that that cuts to the very heart of profound personal loss without ever losing sight of the comedy of life, which carries on regardless.

However, through it all, most of Moretti’s films end on a positive note (however hard won) and Mia Madre is no exception.