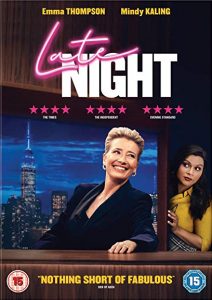 Legendary talk-show host Katherine Newbury (Thompson) is a pioneer in her field. The only woman ever to have a long-running program on late night, she keeps her writers’ room on a short leash – and all male.

But when her ratings plummet and she is accused of being a “woman who hates women”, Katherine puts gender equality on her to-do list and impulsively hires Molly Patel (Kaling), a chemical plant efficiency expert from suburban Pennsylvania, as the first and only female on her writing staff.

I’m not sure what a female version of a Bro-mance is (Wo-mance, maybe?) but this is what we have here. TBH I enjoyed it but wasn’t blown away, but then maybe I’m not the target audience. My wife enjoyed it muchly and if did have quite a few laughs, but for me, the Devil Wears Prada it wasn’t. Nevertheless, a rather enjoyable film and more of which we’ll see in the coming years… and for me, welcome they’ll all be!

Verdict: Solid performances and a few good laughs, but not groundbreaking ***

This film will be shown at The Harbour Club in Portscatho on Monday 9th December.