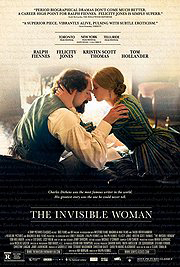 Nelly (Felicity Jones), a happily-married mother and schoolteacher, is haunted by her past. Her memories, provoked by remorse and guilt, take us back in time to follow the story of her relationship with Charles Dickens (Ralph Fiennes) with whom she discovered an exciting but fragile complicity.

Dickens – famous, controlling and emotionally isolated within his success – falls for Nelly, who comes from a family of actors. The theatre is a vital arena for Dickens – a brilliant amateur actor – a man more emotionally coherent on the page or on stage, than in life. As Nelly becomes the focus of Dickens’ passion and his muse, for both of them secrecy is the price, and for Nelly a life of “invisibility”.

Despite being saddled with all of the demands that come with directing a movie – and his debut! – Fiennes also manages to spit out one of the best performances of his career. There is a poetic quality about the film with its dreamy cinematography, ethereal music and wonderful sense of time and place.