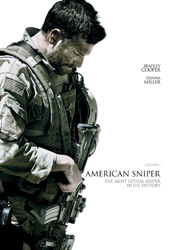 U.S. Navy SEAL, Chris Kyle’s (Cooper) sole mission is to protect his comrades. So successful is he at it, he becomes one of the most lethal snipers in American history, saving countless lives and making himself an army legend. But that also makes him a prime target of insurgents.

Despite grave danger and his struggle to be a good husband and father to his family back in the States, Kyle serves four tours of duty in Iraq. However, when he finally returns home, he finds difficulty leaving the war behind.

Although being a true piece of Americana from Clint Eastwood, there’s no doubt it’s a powerful anti-war film as well as being an astonishing story. He captures the essence of having to make on-the-spot tough decisions in what is an exceptionally stressful arena.

I was both gripped and entertained throughout and the ending does stay with one for a while.

Verdict: Not quite as groundbreaking as Clint Eastwood’s previous films, but a very watchable movie indeed. ****

This film will be shown at The Harbour Club, Portscatho on Monday 1st June.