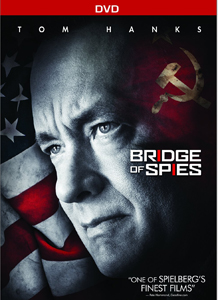 Directed by three-time Academy Award winner, Steven Spielberg, and starring two time Oscar winner Tom Hanks, BRIDGE OF SPIES is the story of James Donovan, an insurance claims lawyer from Brooklyn (Hanks) who finds himself thrust into the centre of the Cold War when the CIA enlists his support to negotiate the release of a captured American U-2 pilot.

This is a charming story and one told well… up to the end. I do tend to lose my patience with Hollywood at times. I truly wish that stars like these didn’t have to ‘follow the company line’ in creating these cheesy, unnecessary endings that talk down to their audience. Is this an entertaining film, well acted. Yes, of course. Why wouldn’t it be. So why do they insist on stooping so low by adding these endings? *Sighs in desperation*

Oh well, Martian did it and now Bridge of Spies followed suit, like many before them. But all in all, it’s a film well worth seeing… despite the cheese.

Verdict: Enjoy the ride, but grip your seat well for falling off at the greasy end. ***

This film will be shown at The Harbour Club, Portscatho on Monday 28th March