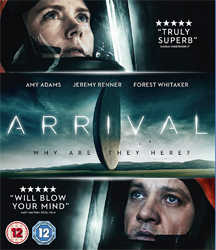 After mysterious alien spacecraft land on Earth, American linguistics professor Dr Louise Banks (Adams) finds herself working with the army to decode the aliens’ communications. Under the command of Colonel Weber (Whitaker), Louise and military scientist Ian Donnelly (Renner) try to learn more about the aliens’ language so they can communicate with them and discover why they have come to Earth, before someone else across the globe decides to attack first. But with the CIA and global leaders monitoring their interactions, will they be able to make their breakthrough without any unwanted interference?

This film grips from the outset and just keeps giving. Seemingly a standard ‘alien sci-fi’ the movie has a haunting underbelly which grows and grows, packing a most audacious punch at the end. This really is a superbly crafted film, well acted and will hold you from beginning to its stunning climax.

Verdict: If you’re gonna watch one Sci-Fi movie this year, make it this beauty. *****

This film will be shown at The Harbour Club, Portscatho on Monday 20th March