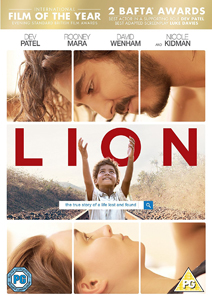 Five year old Saroo gets lost on a train which takes him thousands of miles across India, away from home and family. Saroo must learn to survive alone in Kolkata, before ultimately being adopted by an Australian couple.

Twenty-five years later, armed with only a handful of memories, his unwavering determination, and a revolutionary technology known as Google Earth, he sets out to find his lost family and finally return to his first home.

When celebrated films like this come along, it’s easy to have one’s opinions blurred by the hype. Not so in this case. A film like this could easily become melodramatic or overtly brutal, like Slum Dog Millionaire, but this has been done superbly.

Tender, gripping, absorbing: you are transported from one world to another seamlessly and the acting is constantly engaging throughout. A spectacular work that is worth all the praise and gets my ‘best film of the year so far’ credit.

Verdict: A supremely crafted film with wonderful performances, but bring a good handful of Andrex! *****

This film will be shown in The Harbour Club, Portscatho on Monday 29th May