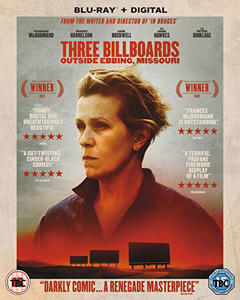 Mother, Mildred (McDormand) becomes frustrated at the local police force’s ineptitude to solve her daughter’s murder. When no potential perpetrators have been identified and the investigation slowly grinds to a halt, she decides to take matters into her own hands to ensure that the media, local citizens and the police take her plight seriously and find her daughter’s killer.

There’s little I can add about this phenomenal film that hasn’t already been said or written in some shape of form. Superb performances by all of the magnificent cast, a solid and believable story with twists turns that keep your engrossed and a dark humour running through an already moving story… truly a to delight and I shall be watching it a third time very soon!