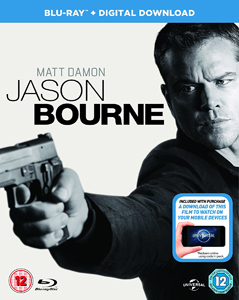 It’s been 10 years since Jason Bourne (Matt Damon) walked away from the agency that trained him to become a deadly weapon. Hoping to draw him out of the shadows, CIA director Robert Dewey assigns hacker and counterinsurgency expert Heather Lee to find him.

Lee suspects that former operative Nicky Parsons is also looking for him. As she begins tracking the duo, Bourne finds himself back in action battling a sinister network that utilises terror and technology to maintain unchecked power.

It was great to hear Paul Greengrass and Matt Damon were back working together after Damon refused to do another Bourne without him. And the film was the usual, exciting fayre from the outset. Unfortunately, the end became way too much Bond-esque for my liking and spoiled what has been to date a brilliant collaboration.

OK, it didn’t spoil the film entirely and it was still an intelligent thriller with some great action scenes, but I only wish they’d stayed to the tried and tested formula instead of using the cheap ‘mega-ending’ car chase which is the usual scape for those lacking an intelligent end to a great movie.

Verdict: A pity but great to see the Bourne A-Team back in action ***

This film will be shown at The Harbour Club, Portscatho on Monday November 28th.