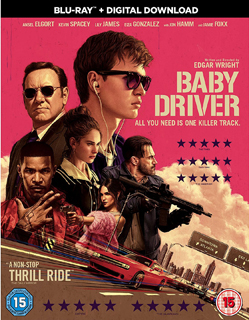 Talented getaway driver Baby (Elgort) relies on the beat of his personal soundtrack to be the best in the game. After meeting the woman (James) of his dreams, he sees a chance to ditch his shady lifestyle and make a clean break. Coerced into working for a crime boss (Spacey), Baby must face the music as a doomed heist threatens his life, love and freedom.

It’s very hard to be objective about a movie which pretty much ticks all the boxes for story, directing and acting excellence… because that’s when this movie is. Astonishingly originally edited and directed, it doesn’t stop there. The story is superb; an unusual love story without any cheese. But apart from being exciting up the the last frame, it has a superb feel-good factor.

Like I said, this movie has it all and you’d be a fool to miss it!