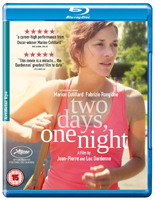 Academy Award-winning actress Marion Cotillard plays Sandra, a young woman assisted by her husband, who has only one weekend to convince her colleagues to give up their bonuses so that she can keep her job.

A simple premise, maybe, but it’a all in the direction, writing and superb acting. The Dardenne Brothers, who are the most celebrated and decorated filmmaking partners in the world, boasting five Cannes wins and countless other international awards have taken this film into competition for the Palme d’Or at this years Cannes Film Festival. And it’s no surprise why. Brimming with a sensitivity, movement and emotion, the filmmakers manage to extract significant amounts of suspense, humanity and even a few dark laughs from Sandra’s exchanges and Cotillard pulls off another Oscar-worthy performance.

Verdict: A superb French drama from some of the best in the business. ****

This film will be shown at The Harbour Club, Portscatho on Tuesday 28th October