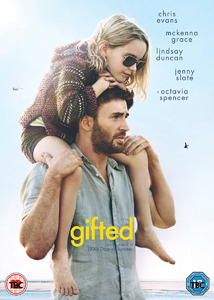 Frank Adler (Evans) is a single man raising a child prodigy – his spirited young niece Mary (Grace) – in a coastal town in Florida. Frank’s plans for a normal school life for Mary are foiled when the seven-year-old’s mathematical abilities come to the attention of Frank’s formidable mother Evelyn (Duncan) whose plans for her granddaughter threaten to separate Frank and Mary.

Although a good natured film with some (essential) wisecracks, it does have some warmhearted performances and heartwarming moments between Frank and Mary. Life-affirming on a small scale, but it has a charm which is undeniable and the wonderful Octavia Spencer does make the most of an underwritten role.

Verdict: A lovely 100 minutes of entertainment with a delightfully charming resolve. ***

This film will be shown at The Harbour Club, Portscatho on Tuesday 31st October