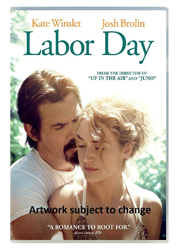 Depressed single mom Adele (Winslet) and her son Henry are forced to offer a wounded, fearsome man (Brolin) a ride home. As police search town for the escaped convict, the mother and son gradually start to trust the man who is anything like his reputation.

Over the course of the 3 day Labor weekend, the three become inseparable until the world slowly moves in on them.

Is it possible Jason Reitman is the director who can do no wrong? After smash hits like Juno, Up in the Air and my personal favourite, Thank You For Smoking, Mr Reitman has written and directed a superb film.

Emotional, heartfelt, warm and sensitive; this movie could easily become slushy in the hands of lesser talent, but the superb acting from everyone, including the young Gattlin Griffith (through whose eyes the story is told) makes this an absolute delight.

My advice: get on down to the Harbour Club Portscatho on Monday 8th September and watch this film.

Verdict: A beautifully directed and sensitively played film that scores on so many levels. ****