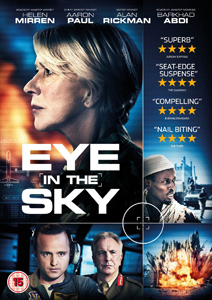 London military intelligence officer Colonel Katherine Powell (Mirren) is remotely commanding a top secret drone operation to capture a group of dangerous terrorists from their safe-house in Nairobi, Kenya. The mission suddenly escalates from a “capture” to a “kill” operation as Powell realises that the terrorists are about to embark on a deadly suicide mission.

American drone pilot Steve Watts is poised to destroy the safe-house when a nine year old girl enters the kill zone just outside the walls of the house. With unforeseen collateral damage now entering the equation, the impossible decision of when to strike gets passed up the “kill chain” of politicians and lawyers as the seconds tick down.

Although filmed almost entirely in 4 seemingly dull locations (An Ops base, MpD’s office, Drone Pilot’s box and a back street in Nairobi) this is an exceptionally fast paced, high octane thriller. The tension mounts as slight changes as an innocent young girl’s bread stand has huge impact, causing ripples throughout the political world and creating some exceptionally difficult on-the-spot decisions.

This glimmer of insight into how some of these military scenes play out (albeit slightly hollywood-fied) is a frightening reflection on modern military techniques and the quandaries and repercussions that surround a solid decision.