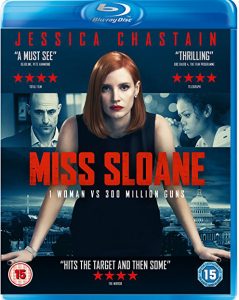 In the high-stakes world of political power-brokers, Elizabeth Sloane (Chastain) is the most sought-after and formidable lobbyist in D.C. Known equally for her cunning and her track record of success, she has always done whatever is required to win. But when she takes on the most powerful opponent of her career, she finds that winning may come at too high a price.

I’m going to stray from the majority of reviews on this film and pronounce it one of the best of the year. It’s a complex story played wonderfully by Jessica Chastain in a story that will leave you guessing to the end.

Although I was looking forward to this film, usually the hype fulfilled all expectations and beyond. If you’re into political thrillers, this won’t disappoint.

Verdict: Up there with The Ides of March, this is a taught and tense ride which has a wonderfully unexpected ending. A must watch! *****

This film will be shown at The Harbour Club, Portscatho on Monday 25th September