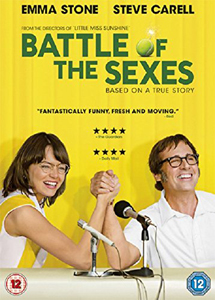 The 1973 tennis match between Billie Jean King and Bobby Riggs became the most watched televised sports event of all time. Trapped in the media glare, King and Riggs were on opposites sides of a binary argument, but off-court, each was fighting more personal and complex battles.

With her husband urging her to fight for equal pay, the private King was also struggling to come to terms with her own sexuality, while Riggs gambled his legacy and reputation in a bid to relive the glories of his past.

In this wave of films focussed on women’s empowerment, this fabulous historical story of just such a battle was certainly aching to be told. It’s a wonderful story (even though some of the ‘facts’ have been stretched somewhat for dramatic effect) with some great performances from all involved and it certainly moved me.

Hardly surprising given the talent behind it (Writer Simon Beaufoy responsible for The Full Monty and Slumdog Millionaire and directors Jonathan Dayton and Valerie Faris for Little Miss Sunshine) so certianly a top class act that whacks several aces.

Verdict: Nicely paced and beautifully portrayed by all ****