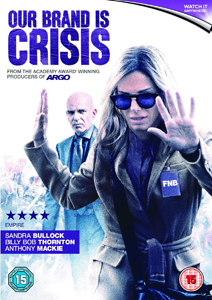 In self-imposed retirement following a scandal that earned her her nickname and rocked her to her core, Jane is coaxed back into the game for the chance to beat her professional nemesis, the loathsome Pat Candy (Thornton), now coaching the opposition.

Somewhat of a mix between Sandra Bullock’s comedy and dramatic roles, at first this seems like it could be a car crash, and indeed many critics saw it as such. But in my humble opinion, it’s a nice balance and leaves quite a moving message about how much (or little) governments truly care about their public or if the whole charade isn’t one self-fulfilling prophesy to qualify its own existence.

Verdict: A nicely paced drama with some smatterings of comedy to help the medicine go down. ***

This film will be screened at The Harbour Club, Portscatho, on Monday 4th July