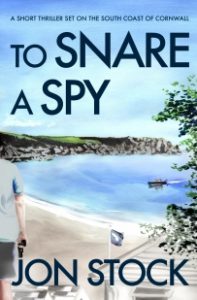 Roseland Online’s main sponsor The Nare has announced it will be publishing a short thriller set on the south coast of Cornwall by acclaimed spy author Jon Stock.

The central characters, Noah (along with Clemmie), has always been interested in spies.  Now it is up to him to track down and find a traitor high up in British Establishment.  A Russian oligarch’s yacht appears in Falmouth and the British Foreign Secretary is also staying at the same hotel – it is a race against time across land and sea. Who can he trust?

If guests are interested in becoming involved with some under cover SOE operations in and around the Roseland area then read further. 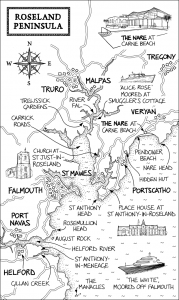 Aspiring spooks who have the savoir faire are being approached to follow on from the mission that Noah and Clemmie undertook last summer and build up the intelligence picture, Their man in Falmouth reports further super yacht visits are imminent in Carrick Roads and covert surveillance needs to be maintained.

To qualify you need to be resident at The Nare sometime this summer/autumn, and be prepared to be sent on an excursion. Please see the map for the field of operation. Landings and insertions may be required to be made from Alice Rose (the hotel launch) anywhere on the Fal and Helford Rivers. Depending on the mission brief some agents will be requested to proceed solely overland without maritime involvement.

In particular they are looking for families or couples who have a good cover story, working naturally and blending in with a holiday atmosphere. Single agents may also be required though it is preferable that a small operational team is able to work together.

More intelligence will become available in due course once they have reports back from agents in the field.

The book will be available for sale on the Nare website from Thursday 20th April. … and from that moment Operation Snare will commence with spy missions for resident guest agents!