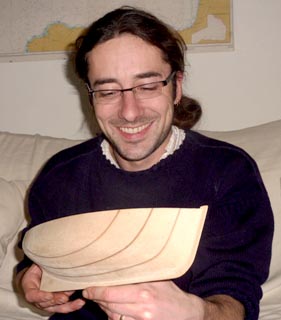 This month our house has been overrun with models. At one point I counted seven of them crowded around the kitchen table. Si’s even been taking them to the pub. Worrying snippets of conversations have drifted over to me. ‘She’s quite full amidships’ or ‘she’s got a nice firm bilge’. Comments like ‘fine entry’, ‘shallow sloping buttocks’ and ‘tucked up little transom’ have been floating around. Yes, obviously. I’m talking about boats.

We started January by sending a digital file of Si’s design over to Steve Neal at Fibrefusion, who then worked with Simon to cut a half model of our boat in MDF using a three axis router. This whole process took a matter of hours, from converting the digital file to the router’s software, calibrating the machine and preparing the material, to cutting and fairing the final model. All jokes aside, she is a beauty, and we are so excited to have the first concrete, three dimensional example of Si’s design. 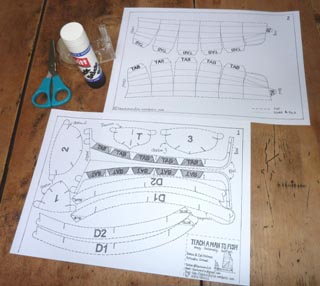 Having made our half model, Si was keen to make the hull into kit form, so that we could build a scale version in card to assess the way the frames fit together. Having done that for the benefit of the design, we thought it might be nice to come up with a slightly simplified version of the kit that would work well on A4 size, so that everyone could have a go at building our boat. You can download it here. There are detailed instructions for how to make the kit model, along with more about how we got our half model cut on the blog here. We’d love as many people as possible to have a go at making a card model of our boat, and then to email us photos of the results. The more colourful, decorated and creatively named the better! 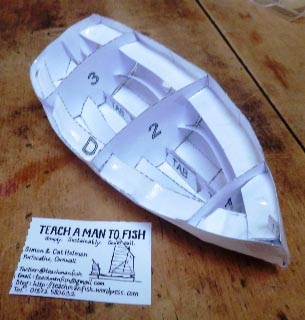 Once New Year blew over, I decided it was time to bite the bullet and get in touch with the authorities with the aim of clarifying the legislation surrounding fishing under sail and conclusively establishing the official position on this. I have to admit to having put this off for some time. Despite spending quite a bit of time researching regulations before Christmas, I had been left with a sense that despite the current legislation allowing unpowered commercial fishing in vessels under ten metres to fish without licence, registration or quota, the authorities’ stance on this was somewhat shaky. I was reluctant to delve further into it and risk discovering that our plans were not as robust as we’d hoped. So it was with a fair amount of trepidation that I rang the MMO (Marine Management Organisation) in Plymouth. 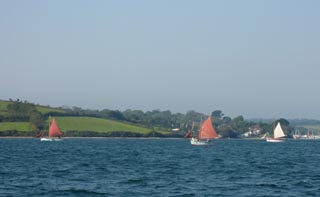 Fortunately, Nick Wright, the District Marine Officer for our area, was extremely helpful. To summarise, we had correctly interpreted the legislation, but this was subject to imminent change. It sounds likely that the licensing system will undergo an overhaul and our category may be in future required to hold a licence. However, little is known about how this will in practice affect the under ten metre unpowered fleet, so it appears to be a question of waiting for further clarification. We were advised to register an expression of interest in fishing under sail and to demonstrate our commitment to this by detailing our plans in writing to the MMO. We did accordingly and are now in the position of waiting to hear back from them. 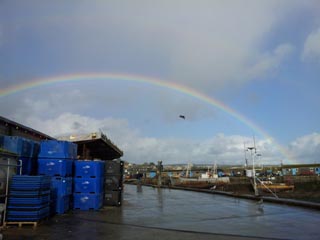 It’s a funny thing going into an industry like fishing. Before we started our project, fishing was something we lived around and respected, but in reality knew very little about. Our trip away on Planet meant we came into contact with fishing on a virtually daily basis, and gave us the chance to meet and chat to people working in fishing more than we would do at home. I suppose that back in Britain prior to our trip, with a few exceptions we only came into direct contact with fishing boats when out sailing. On a yacht, your first thought is to avoid any nets and trawls, to give boats a wide berth and to try not to get in the way of someone working. And at night, in the middle of the Channel, they’re big boats, you’re small, they’re scary. 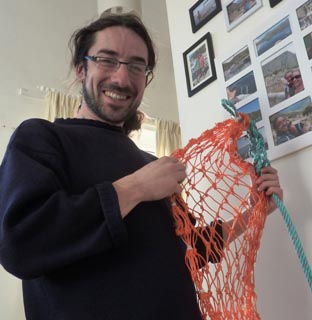 Perhaps all this led to us feeling a little nervous about entering the world of fishing. We couldn’t have been more wrong, as perfectly demonstrated by Si’s experiences this week. Towards the end of last year we found out about another course being run by Seafood Cornwall Training. Si applied for a funded place and got one, so last Friday started a three week Introduction to Fishing course in Newlyn. He has found so far that fishermen have been unfailingly friendly and kind, whether in the Fishermen’s Mission over a cup of tea, in the harbour looking round their boats, or in The Swordfish over a pint. Everyone has been extremely helpful and generous with information and advice. The course covers fishing techniques, net mending, gear handling, as well as the necessary safety and training qualifications required to become a commercial fisherman and so far is proving very interesting. Si came home at the end of the first week with a cod end he had made; the end of a net or trawl which is tied with a specific knot to prevent the precious catch from escaping despite being bumped along the sea bed. From models to fishnets all in one month!