On one of my regular visits to southern Germany a couple of years ago, I was handed a small piece of yellowing paper. I looked at it blankly for a moment – my German is not good – but I suddenly made out the word, Falmouth.

It had been copied from a German U-boat log book. Captain Wilhelm Rollmann had slipped quietly into Falmouth, not once but three times, undetected, laying mines. 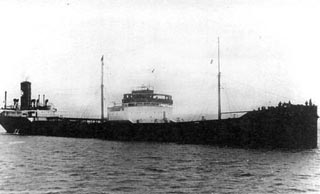 Falmouth Bay holds the remains of at least ten steamships, most of which are still marked on Admiralty charts. At various times, they have all been flattened by salvage companies to reduce their hazard to shipping. The largest is the Caroni River, a 7,807-ton oil tanker which struck one of Captain Rollmann’s mines on the January 20th 1940, just after she had left Falmouth harbour to carry out engine trials. There was massive explosion and she sank within an hour.

The Falmouth lifeboat recorded, ‘at 11.20 a.m. the St. Anthony Coastguard reported a vessel in distress three miles S.W. of that point. The lifeboat was launched fifteen minutes later and found the tanker Caroni River, of London, sinking rapidly after striking a mine.’ Twenty seven of her crew were rescued by lifeboat, and the rest by a drifter, there was no loss of life. 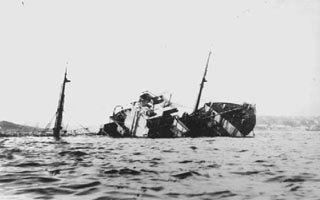 As the entire area had recently been swept for conventional contact or horned mines, and there had been no reports of enemy aircraft over the bay, which might have laid mines by parachute, magnetic mines from a mine laying submarine seemed the most likely answer. A German coastal submarine of 300 tons was known to be capable of carrying nine such mines, which meant, assuming the naval experts had guessed correctly, that eight more could still be lying on the bottom of the bay. A magnetic sweep was improvised and a minesweeper left Falmouth harbour on the same course and speed as the Caroni River. Within a short time, ‘eight big explosions in succession, each followed by towering columns of water, proved the experts right’. The German log book states that U-boat 34 had only laid 8 mines and as the Caroni River had already struck one, I think that the report of eight explosions may not be correct.’ 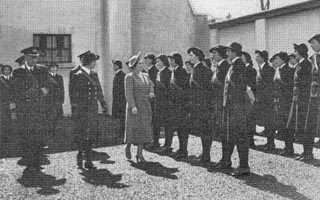 It now remained to discover how the Germans had managed to navigate so close inshore with such accuracy at night. An after-dark cruise round the bay soon supplied the answer. St. Anthony head with its lighthouse was clearly silhouetted against the night sky and made a very good bearing. The other was the Manacles light buoy, flashing out its warning to friend and foe alike. The Manacles buoy was immediately extinguished and was not turned on again until the war was over.

Another possibility may have been that the Germans knowledge of Falmouth may date back to 1939 when their battle ship Schleswig Holstein paid a courtesy call the port. She was one of the few foreign battleships ever permitted to anchor in St. Just pool. The ship was full of cadets, and the Townsfolk were invited on board. These young German cadets took numerous photos around the area which must have been invaluable when the war started. When the Schleswig Holstein left the harbor, a band played on Pendennis Point, where a large crowd had gathered to wave farewell. Ironically, just few weeks later, this vessel fired the first shots of the Second World War in Poland.’

The Caroni River sank right in the middle of the bay and although marked as three separate wrecks they are in fact three parts of the same ship.

It would be two more years before the port and town of Falmouth would feel the full force of the War. It took only two enemy planes flying over the docks and dropping their bombs, to cause havoc. The Tiara, a brand new Anglo Saxon Petroleum Company tanker which was alongside the Northern arm of the docks, was set alight. The tanker, British Chancellor, was next to her and was set on fire and sank. The next vessel, the Tuscalusa, was also left burning as was the Marie Chandris, loaded with cotton. She burned for six days and nights. As the fires raged and the thick black smoke filled the sky, fifty to a hundred men were trapped on the Northern arm in a concrete bunker where they had run for shelter. Many of the men, mostly dock workers, were badly burnt.

The Marie Chandris was towed from inside the Northern arm and grounded while the firemen battled to put the fire out. Two days later, on high water, she was towed off St. Mawes, grounded and sunk, but not before she burnt for a further day.