“August brings the sheaves of corn,

Then the harvest home is bourne”

If anyone was not sure that our weather systems are in flux and environmental conditions are changing, then July should have convinced even the most serious doubters.

When you consider the human body is 37.5 degrees, as is that of most warm-blooded animals, then this spells a serious change for our mild and temperate island.

It also spells changes for our gardens. If the weather were simply to get hotter and drier, as in the Mediterranean, then we could adjust the range of plants we grow. Unfortunately this is not the case as it has already shown that the weather is simply getting more extreme. Higher temperatures, more violent storms, when it does rain it rains with much more enthusiasm. Snowfall too is very variable and temperatures can get unusually low.

I think we need to go forward with the spirit of experimentation – if a plant does not do well, try moving it to a different type of position. If it does not thrive, discard it. Our plants will need to cope with drought, periods of high rainfall, strong winds and the odd year of very low temperatures and snow.

We can help by improving the soil – adding material so that it drains freely but also adding more organic matter to retain the water when necessary. And as I’ve mentioned before, put a water butt on every available downpipe. Even on the shed or greenhouse. Try and collect as much water as possible. 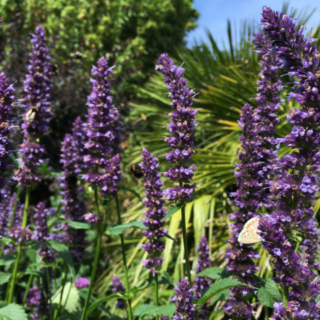 Now is the time that camellias are growing buds for next year’s flowers. Traditionally we are told to water them during dry periods to make sure the buds can form properly, but now I think we need to consider if we should, unless of course they are in pots. Perhaps we should mulch them well over the winter, feed them in spring, give them all the help we can but not water them and just see how they do.

It might be the case than camellias, and some other trees, may no longer be the ‘right plant in the right place’.

It’s time to prune early summer flowering shrubs. Once the flowers have finished, give them a once over to keep them at the size you’d like. For plants such as weigela, deutzia, you can take out the oldest stems to keep the shrub dense and fresh.

Keep trimming evergreens when they need it. Prune beech hedges before the end of the month so they have some new growth before winter – it is the new growth which retains its leaves until next year.

Shear over English lavenders when the have finished flowering to keep them compact and tidy, but do not cut in to older wood or the stem will die. French lavenders can be deadheaded through the summer and they will just keep on flowering.

Prune new growth on pyracanthas to expose the lovely bright berries for an autumn display, until the blackbirds get them!

Also prune back any long and unwanted new growth on rambling roses. Tie in any shoots that you’d like to keep.

Keep on deadheading religiously to keep your borders flowering well in to autumn.

You may find some earlier flowers are beginning to go over now. Any of these can be cut back, especially hardy geraniums, as you should then get a new flush of growth and maybe some more flowers too (providing we have enough rain for them soon). Lift and divide bearded irises.

If you have seen evidence of adult vine weevils cutting slices out of the edges of leaves, apply nematodes in water to the soil now to control the larvae. They are especially fond of heucheras and sedums, and I have seen them on hardy geranium roots too.

If you have bought any autumn-flowering bulbs, do get them in the ground as soon as they arrive and water well. Such as colchicum and autumn crocuses, Amaryllis belladonna and Cyclamen hederifolium. 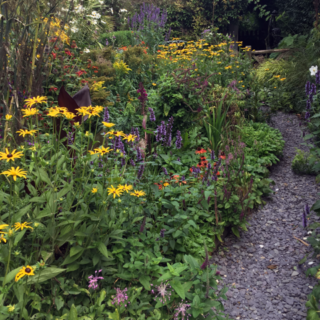 Fill any gaps with autumn plants such as asters, rudbeckias, potted dahlias and hardy chrysanthemums for a lovely display that can keep flowering almost until Christmas in a mild year.

Later on in the month and in to September, sow hardy annuals where they are to flower for an earlier display next year. Californian and opium poppies, calendula, love-in-a-mist. 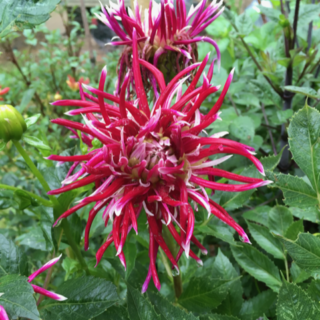 Harvest continues! If you haven’t watered much then produce may be drying up a bit now, but there is still plenty to pick. Sweetcorn should be ready soon too. 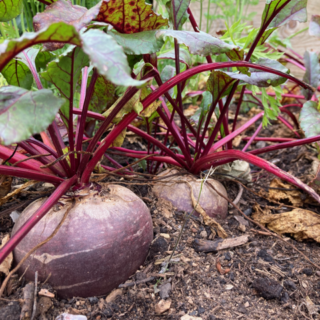 Autumn raspberries may be along very shortly, blackberries too, and currants. Although my summer-fruiting bush raspberries have been producing a staggering amount this year since the beginning of June and they are still going. They have not been watered at all and are very close to a water-sapping apple tree so I can only imagine their roots must be very deep! When they do finally stop fruiting, I will cut back the fruited canes to the ground.

The weather has at least been kind to tomatoes. Mine grow outside as we don’t have a greenhouse, they are just beginning to ripen now as I planted them a bit late. I have had to water them two or three times a day though.

Hopefully we will start to see a little rain this month. I follow a semi-professional weather forecaster online and he has seen early models suggesting another warmer period coming up in early August, although of course it’s always subject to change! Especially with hurricane season beginning in the Caribbean which usually head our way before they die away completely. 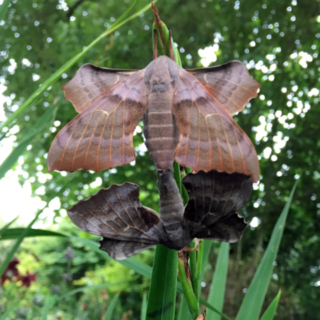