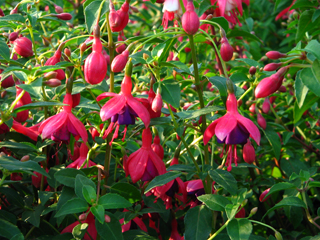 It’ll soon be Christmas. Gosh it seems to come round quicker than ever and in mid- November with my summer baskets still OK and flowers on the clematis things were looking good. OK we have had enough rain but the mild temperatures meant I didn’t take the tomatoes down until early November. In fact I was rather amused to do my daily walk around the garden and see fuchsia, clematis, roses, campanula and chrysanthemums all in flower together.

The dahlias were still OK but perhaps the biggest surprise was an agapanthus in flower with a bud still to come. The flowering cherry still had all its leaves with just a few beginning to turn and of course the hydrangeas still look good even when the flowers are beginning to look papery. I had the good sense last month to bring some in for drying and spraying for Christmas arrangements and I have dried some eucomis flower successfully this year too.

And then they promised a cold snap, I looked at the long range weather forecast and well, you just don’t want to know the rest… I suspect there is some real winter around the corner. 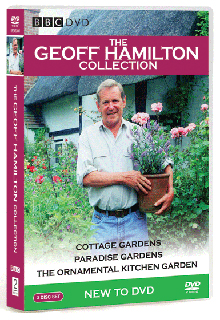 So what to do in December? If you look out of the window into your garden on a cold winter’s day you should not be looking at bare mud, twigs, leaves and rotting herbaceous plants. Winter is a time for planning, thinking about the year’s successes and failures and wondering how your garden can look better in winter. (If yours is looking stunning then stop reading now!). You can put a winter smile on your face by using the three tier approach much vaunted by the late Geoff Hamilton. His approach was to use a tree or two, a lower tier of shrubs or herbaceous plants and underneath that a layer of lower growing plants.

The tree for this time of year which will flower on and off throughout the cold weather is the autumn cherry Prunus x subhirtella ‘Autumnalis’. It doesn’t get too large and has semi double white flowers. There is also a pink version’Rosea’. Alternatively the evergreen cotoneaster x waterii with masses of long lasting berries. Geoff always said this is really a large shrub but can double for a tree in a small garden.

For the middle tier the dogwoods have brightly coloured stems and the variety ‘winter flame’ has the fiery red foliage in late autumn too. My late mother in law was a great fan of daphnes. I cringe slightly because I know they don’t like being moved from pot to soil and certainly not once they have established. But she didn’t know that and I didn’t tell her and so she moved them around the garden successfully and in blissful ignorance. How often that state of mind is a blessing! 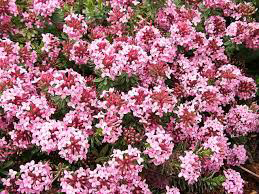 The daphnes are supposed to flower in February but mine is often in full bloom at the end of December and throughout January and February. It is a shrub that has very long lasting flowers and one really feels it gives value for money. The variety d.odora ‘Aureomarginata’ is particularly pretty with variegated foliage and is hardier than its plain green relatives. Winter flowering heathers are superb on the bottom tier. All the Erica carnea varieties have a prolonged flowering period from January to April and they do not need an acid soil.

The variety Eileen Porter will flower all winter and starts usually in mid-December. She is a rich carmine red and seems appropriate in the Christmas period. Also on this tier are the bergenias which often look a bit moth eaten and raggy in the summer but as soon as the colder weather comes they seem to straighten their backs their leathery leaves green up and some varieties not only have the pink flower but rich red tinges to the leaves also. A little shade will encourage the Christmas rose Helleborus niger a lovely evergreen that produces delicate white flowers for Christmas. This lower tier will also accommodate the winter flowering bulbs including aconites, scillas and early crocus. 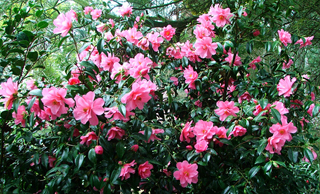 There is no excuse to be without flowers and all this without mentioning the camellias which, depending on variety can be with us in flower from November to May.

I often look at the garden and remember with fondness the plants that have been given to me. I have two mature holly trees which are cuttings my father took many years ago. I have a monkey puzzle tree which was grown from seed from his garden. But this year and right now, I am going to move a tree lily bulb which was given to me as a birthday present by my mother in law, recently departed. It’s one of those strange things. You keep thinking I must move that lily and I have been thinking that for about three years.

But now she has gone this is a very much more important task as it will always remind me of her. If you want lilies, which I think are better in the garden than pots then they should really go in now. But the garden centres are so busy selling baubles you might be lucky to find them. By the time you do the soil may be too wet or frozen to plant them. If that’s the case pot them up temporarily and move them later. They do not mind disturbance, contrary to popular opinion, as long as the drainage is good and if in doubt plunge the pots straight into the ground when the soil is workable. If you pot a few every month from now until April you will have flowers until next autumn. 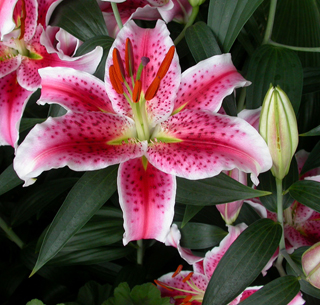 If you have a moment over Christmas when the soil is workable and the visiting family are just proving too much, go out and dig the runner bean trench. Dig only to a spade’s depth and start filling it with all the vegetable peelings that are accumulating over this festive period. Refill it with soil in March/April and vow to grow the longest runner bean for next year. I think we are striving in local shows for over 24” so the better your trench now, the more likely your success.

This autumn my terrace has been adorned by a large yellow chrysanthemum which I bought at the Veryan Show auction last year for a very handsome £6.00. (The auctioneer was outrageously pushy, hence the price, although this year he managed to get £10.00 for a similar specimen.) It was grown from a cutting by a friend of mine who donated it to the auction. It has flowered brilliantly and profusely for two years now, it is called Gilbert and is a constant delight as it shines through the gloom as the early darkness looms.

Only three weeks and the nights start drawing out, I can’t wait.