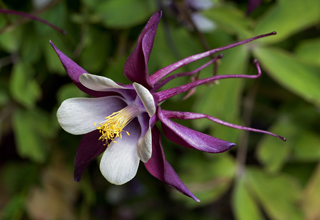 Well, what a funny phase we’ve been through recently. Relatively even daytime temperatures, persistently cool nights, thunderous winds (during which one of us was on the Roscoff ferry, getting NO sleep whatsoever, but at least keeping her supper down) torrential rain and then someone flicked the switch to “cook on high heat”, our poor gardens just don’t know what to expect next. Nor do we, to be honest.

There are some herbaceous perennials which you can cut back hard at this time, especially if they have spread beyond their allotted space. Perennial geraniums (NOT the bedding Pelargoniums) aquilegia, centaurea and nepeta (catmint) are a few that thrive on a chop back. Give it a few days, and you will see new growth from the base and in a few weeks, flowers again. It seems harsh, but it means you’ll have flowers much later into the season, and their neighbours will have some room to breathe. Do not be tempted to divide anything which has got too big – it is totally the wrong time, and that can wait until autumn, or early next spring. 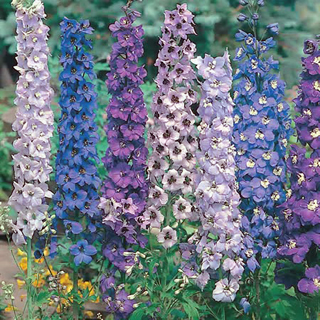 We don’t know about you, but one of us also watched all her beautiful delphiniums get dashed to the ground during those evil winds at the beginning of the month (weeps gently). Dispiriting to say the least, but on a positive note her neighbours had lots of lovely cut flowers they hadn’t been expecting. Again, delphiniums can be cut back hard to the ground, and you can keep your fingers crossed for a second flush later in the season. The flower spikes won’t be as tall or as numerous as they were first time around, but still a joy. Oh, and anything you cut back, give a good feed at the same time – liquid seaweed is a good organic option, and there are many other other preparations. Go for the liquid feeds for herbaceous plants as they are absorbed more quickly than the slow release pellets.

There is also still a little time to cut back any evergreen shrubs that have outgrown their positions, now that the threat of frost has passed, and before it gets too hot. Leave those not in flower or about to flower until another time. Pick a cool day and have a good chop to the shape that you want, remembering that there are shapes other than “the mound” aka “the man chop”. In my experience, this shape is what results most often if a man gets to do the prune, especially if he does it with a hedge trimmer. (All cries of protest should be addressed to the editor, please….) Try and leave some looser shapes – your garden will look more natural and flowing as a result. Or alternately, create that chicken you’ve always wanted. 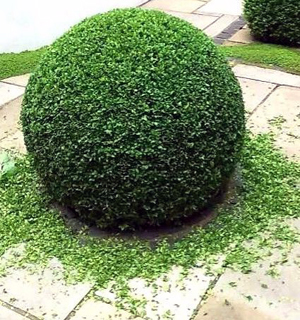 But, we hear you cry, doesn’t pruning encourage growth? Indeed, pruning in spring encourages growth, but the summer prune controls size. This is because much of the spurt of growth for the year has already been done by the plant and you will be cutting into that new growth. Do not prune on a scorchingly hot day, or if a very dry spell is forecast, otherwise your plant may become stressed and crisp up a bit.

Now is also the perfect time to take some cuttings from perennials or herbs, for two reasons. The first is that you can increase your stock of plants very cheaply and quickly by doing so, and secondly, because you can give any excess to the myriad of fetes over the summer. Pelargoniums (scented and the regular ones) are particularly easy to propagate this way, as are rosemary, sage, fuchsia and penstemons. In all cases, use a very sharp cutting implement, leave only a couple of leaves at the top of the cutting to avoid moisture loss, and pot them up as soon as possible. The best potting medium is a gritty compost mix, and make sure the compost is in contact with the base of the cutting

It is getting late too set off any flower seed for this summer’s displays, but there are lots of nice, small bed fillers coming into the garden centres. While cosmos is the easiest thing in the world to grow from seed, if you don’t have the time, resources or energy to do so, there are some lovely plants available. With some deadheading, they will fill a hole in your borders or pots, and keep 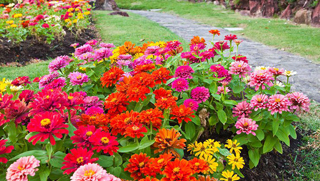 going all summer long. Same with zinnias for some zingy, if a little scary at times, colour. Really good value plants. Osteospermums are also a good bet, and they come in all sorts of colours. Remember to ask for the annual bedding variety rather than the perennial versions though, other wise you might end up with something rather bigger than you intended. And there is still a little bedding in multipacks available, if you want to buy smaller plants in bulk. Supply has more or less run out now though, so grab it while you can.

Up until now, we have largely avoided the subject of garden pests, but now we are all looking lovingly at our pots, containers and burgeoning herbaceous, we can not escape coming across that heinous of all enemies, the slug. Boy, are there some big ones around this year. Here are some alternatives for dealing with them.

If you like to stay completely organic and not use any non-naturally occurring substance, you might need to head out with torch, bucket of salty water, and a good thick pair of gloves, or a pair of hobnail boots. We just can’t bring ourselves to tread on them – just too squidgy – but the bucket solution has some appeal. 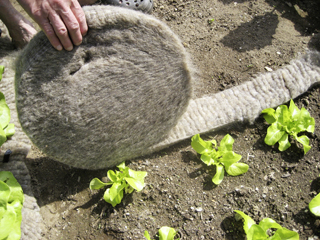 Watering in nematodes has been shown to be effective, but is not that cost effective for a large area. Nematodes live in your soil anyway, but this is just like opening the doors to Selfridges on Boxing Day – millions will pour to grab the slugs. They last about 6 weeks.

There is a newish product on the market which is made of sheep wool, and slugs do not like to cross it. It didn’t work for one of us, because a) she didn’t like the smell and b) it became a very expensive dog food. I appreciate that not every dog is as greedy as mine, so it might work for you. Bad dog. 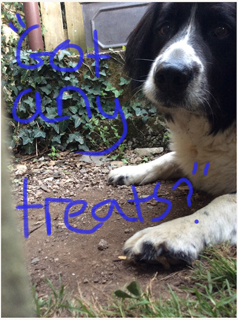 Moving a little further along the scale, you can get organic slug pellets now which do not affect the birds that might eat the expiring slug, mainly because it heads underground to die. This is a big improvement. One disadvantage we have discovered this year though, is that badgers actively seek out the pellets, so you might see some damage from an unexpected source! And of course, you can still get the good old-fashioned chemical slug pellets which are not organic in any way.

So, you pay your money, you take your choice. Whatever the case, remember you are despatching a living creature, so maybe we just have to learn to share a bit of produce and flowers with our slimy friends.

Well, that was all rather philosophical. Time to pop out and bask in the first rain for a few weeks, and boy, do we need it. Oh no, here come the slugs too!